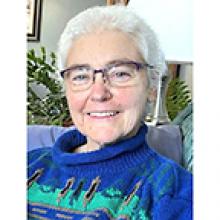 
It is with great sadness we announce the passing of Carol Dobrowolski (nee McElroy) on Sunday January 9, 2022. After a valiant fight against cancer, Carol passed peacefully at home surrounded by family.
She leaves to mourn her beloved husband of 35 years, Dale, as well as her mother Irene Coleman, and siblings, Dena (Lawrence) Gillis, Calvin McElroy, Carla (Harvey) Friesen and Patti (Kent) Barclay. She also leaves in-laws, Diane (Gary) Loewen, Doug (Kelly) Dobrowolski and Arlene (Brian) Dorge, as well as many nieces, nephews, relatives and friends. Carol was predeceased by her father, Frank McElroy as well as stepfather, Gerald Coleman and in-laws, Carl and Olga Dobrowolski.
Carol was born in Stonewall, Manitoba on November 14, 1960, middle child of Frank and Irene and twin sister to Carla. The family moved to Darlingford, Thornhill and then later to Morden, where Carol received all of her schooling. She graduated from Morden Collegiate in 1978. She then enrolled at the University of Manitoba in the Faculty of Education and Faculty of Human Ecology, where she completed both degrees in 1982. Carol started her teaching career with a term position at Thomas Greenway Collegiate in Crystal City, Manitoba. She then took a position at Westdale School in Charleswood, Winnipeg where she taught the rest of her career (39 years). Teaching was Carol's passion, and she took on each role and responsibility with ease. She always looked for the best in her students and did all she could to help her students be successful. She was an active leader within her school and became a role model and mentor for many new teachers. Nothing was too much for Carol to take on.
In her spare time, Carols' first choice was to spend time with family. Heading to their seasonal camp site at Lac du Bonnet was a regular weekly outing during the camping season. Attending family celebrations or just relaxing together were regular events. Other activities enjoyed were golfing (especially with long time friends Lynda and Tannis), hiking, reading and working on fun projects or custom sewing. Many bridal parties have seen Carol's touch. Travelling to fun spots with Dale, was always an enjoyed pastime, but it was always nice to get back home. Hawaii was one of her highlights and favourite travel spots. Attending cultural and sporting events were also highlights Carol enjoyed. She held season tickets for Manitoba Theatre performances as well as Rainbow Stage. Carol was also an avid Jets and Blue Bomber fan and was able to cheer from the stands at last year's Banjo Bowl and return of the CFL.
The family would like to thank all those who assisted with Carol's treatment and care through CancerCare at the St. Boniface Hospital. The team of health care workers was phenomenal in supporting us through this journey.
In lieu of flowers, please donate to a charity of your choice or to CancerCare Manitoba.