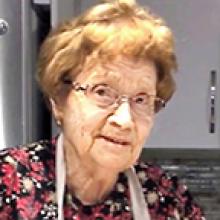 
Peacefully on Saturday January 8, 2022, at 11:10 a.m., Aurélie Miron passed away at Actionmarguerite St. Boniface, at the age of 94.
She was predeceased by her loving husband Charles Miron; sister Jeannette Callarec; brother Alphonse Morin; her daughter-in-law Rita Miron; as well as by her youngest son Robert Charles who died in an accident on April 14, 1981.
She is survived by her older brother Louis Morin residing in BC; her five other children: Lucille Swait (Warren), Irène Morrish-Simmons, Ernest Miron, Noélie Lavergne (Maurice), and Faye Miron-Tascona (Chris); her 16 grandchildren: Michael, Christine and Robert Swait, Ian, Aaron and Andrena Morrish, Natalie, Luc, Eric, Simon and Annick Miron, Diane, André and Mélanie Lavergne, Isabella and Sébastien Tascona; and her 21 great-grandchildren. She is also survived by her sister-in-law Gabrielle Cantin; her brother-in-law Harold Weisensel; and several nieces and nephews.
Mom identified herself as a domestic engineer, and she took enormous satisfaction in creating and running a loving family home while raising her six beloved children. She encompassed the full meaning of a homemaker, taking pride in her skills in the kitchen, sewing room, and garden. She loved to have family visit, and took care in building and maintaining relationships with her children and their spouses, the grandchildren and their spouses, and her great-grandchildren. She saw her entire family as a blessing.


Mom, you are eternally engraved in
each and every one of our hearts.


Due to current restrictions, her cremated remains will be interred at a private graveside service for immediate family.


We will always remember - with love -
your life, from start to end, and we are
all shaped by your wonderful presence
in our lives, as mother, grand-mother,
great-grandmother, sister, sister-in-law,
aunt, and as a friend.