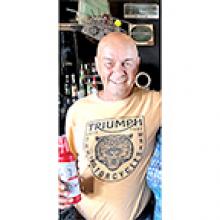 
It is with great sadness we inform you that Michael Lawrence Zagozewski passed away suddenly on January 2, 2022, following a stroke at his home in Hnausa, MB on January 1. He passed away at the Health Sciences Centre with his wife Jacquie and stepdaughter Kaitlyn by his side.
He will be greatly missed and lovingly remembered by his wife and best friend Jacquie. He is survived by his stepdaughters, Kaitlyn (Blaine), Shawnee (Trent), Taylor (Creyton) and his daughter Mackenzie. He will be lovingly missed by grandchildren and life treasures, Kenley, Lucas, Walker, Emery, Nash and Maia. Left to mourn his passing are brothers, Sheldon (Kathy), Daryl (Dianne), and David; his uncle Barry (Marlene), aunt Sylvia and numerous nieces, nephews and cousins; his mother-in-law Phyllis (Dave), sister-in-law Tracey (Brent) and nieces. He also leaves his very close friends, Hugh (Lorraine) Collins, Barry (Elaine) Johannesson, Darren (Kim) Sigurdson, Gary Thorarinson, Cole (Chelsea) and Ashtyn (Mathew). He was predeceased by his parents, Ted and Eileen, brothers, George, James and Wesley, Braden and brother-in-law Jeff Einarson.
Mike was born in Gimli, MB on May 3, 1963. He was raised in Riverton and always took great pride in his hometown. He was very family oriented and was always happy to lend a helping hand to his brothers and friends. Mike was very ambitious and he started working at the young age of 13 with his dad on P&T Construction. He graduated from Riverton Collegiate in 1981 and worked with Manitoba Pool Elevators from 1981 to 1988. He then began his career with Manitoba Hydro where he was proudly employed for 33 years. He was a "Lineman by trade" and in 2007 he became a Field Safety Officer and upgraded his education at the University of Manitoba. Mike enjoyed his years of service, especially spending time with his co-workers and acquaintances. Travelling across Manitoba he always enjoyed meeting new people and seeing new country.
Mike cherished his early travels and weekend visits with his daughter whom he loved very much. He enjoyed hunting, fishing and more recently smoking meats and making rulapysla.
In 2014 Mike found a new enjoyment in life, when he met Jacquie. They celebrated their marriage on September 1, 2018. Together they purchased a home, on the lake in Hnausa, where they enjoyed having their family and friends over. All special occasions were celebrated including "Amma days" every Thursday.
Mike loved life and lived each day to the fullest. He greeted everyone with that infectious smile that made you wonder what he was up to. He always tried to have a positive attitude and look for the good in everyone. He would have given the shirt off his back to a total stranger. He was a true and loyal friend to many, well loved and will be greatly missed.
Cremation has taken place and a funeral will be held at a future date.