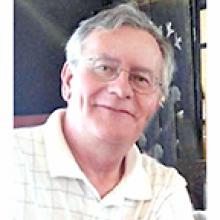 
It is with heavy hearts that we announce the passing of our father, Wolfgang Pochert, at the age of 66. He has shown us what immense strength is in the face of an impossible situation, to carry on when you lose a bit of yourself day by day. After a long battle, and well beyond expectations provided by specialists, he passed peacefully in his sleep Sunday, January 9, 2022, at Oakview Place Care Home, Winnipeg, MB.
Wolfgang will be lovingly remembered and missed by his wife Cheryl and his children, Kimberley, Stefanie (Wes), Erika (Doug), and Daniel; brother Harold (Pat); nephew Christopher, as well as his five grandchildren, Lily, Nathan, Anna, Rhodes and Julie.
He was predeceased by his mother Erika Pochert and his father Horst Erich Pochert.
Wolfgang began his professional working career at Avis Car Rental before joining the glass industry for over 40 years with AGC Flat Glass (as it is known today). He began as a draftsman and worked his way towards Manager of his branch location before retiring at age 63.
When he wasn't pouring his soul into his work, he was pouring his soul into his family and his home. Wolfgang could frequently be found tirelessly working on projects around the house, often requiring him to teach himself new skills, which he had no trouble in doing. In his off time, he loved his quiet moments on Sundays watching Formula 1 or NASCAR.
He also shared a strong fondness with the west coast of Canada which he had hoped to retire to one day but had deep roots in Winnipeg he didn't want to leave behind.
Respecting our father's wishes, cremation has taken place. A private family service of remembrance was held on Friday, January 14, 2022, at his home in Winnipeg.
Our family extends a sincere thanks to the staff on the third Floor at Oakview Place Care Home for their care and dignified treatment of our father in his time of need. We would also like to thank our friends and good neighbours for their kind support through this difficult time.


Rest in peace Dad, we love you.