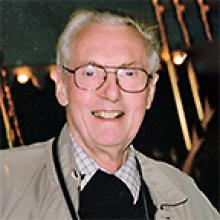 
It is with great sadness that we announce the passing of our husband, father, grandfather and friend, Dr. Robert Stark, on January 6, 2022, at the Grace Hospital.
Robert is survived by Joyce, his best friend and wife of 56 years, his children, Catherine (Michael) and Andrew. He also leaves behind his cherished grandchildren, Daniel, Austin and Lucas. He was predeceased by his parents, (Malcolm and Catherine), and by his sister (Florence).
Robert was born and raised in Scotland, amid the backdrop of the Great Depression and Second World War. At the age of sixteen, he got his first job as a conductor, collecting fares on the Glasgow tram cars. He studied medicine at the University of Glasgow, specializing in Pathology. After graduation, he fulfilled his military service obligation as an officer in the British Army Medical Corps, serving at bases in England, the Mediterranean and North Africa. In 1968 Robert moved his young family to Winnipeg to accept a position in the Department of Pathology at St. Boniface General Hospital, where he worked for 40 years until retirement.
Robert really took to life in Canada! He loved to explore National Parks while taking his family on summer vacations throughout Canada and the US. In 1972, Robert and Joyce built a home in Southdale where they raised their family.
Robert loved to travel. At age 16 he solo bicycled 900 miles from Glasgow to London and back, staying at youth hostels along the way. He took his family on winter escapes to Hawaii, California and the Caribbean. He also took many trips with Joyce to Europe, Asia and Australia.
Robert loved being a father and grandfather. His greatest joy was spending time with his family. He made many memories taking his children and grandchildren on fishing trips and hiking expeditions. He also enjoyed watching their various sports events. Robert was always ready with a quick bit of advice, often expressed by sharing funny anecdotes of growing up in Scotland.
After retirement, Robert continued to develop his communication and leadership skills at Toastmasters. He would faithfully join the weekly meetings to present and critique speeches, and had many administrative roles within his club. His friendships with his Toastmasters community brought him great joy in his final years.
Robert was a kind and gentle man whose life reflected his core values of hard work, humility and kindness. Personal and economic challenges during his youth made him a fierce advocate for the marginalized. He gave us so much by his life example, and he will be dearly missed.
Robert's family greatly appreciates the tireless dedication of all the medical professionals who cared for him since his stroke in October 2021. Special thanks to Dr. Matt Labossiere at Grace Hospital who led Robert's care during his final days. We will always be grateful for your wisdom and compassion.
A private family service will be held at a later date.