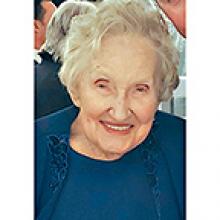 
Mildred left this world to be reunited with her loved ones and embark on her next adventure on January 10, 2022, at the age of 95.
From the safety of her home on Burrows Avenue surrounded by her family, to the shores of Great Slave Lake surrounded by fish, Mildred lived an extra-ordinary life of an ordinary girl from a Ukrainian immigrant family. Growing up in 'Hotel Cholodnuk', a haven for new Canadians coming from Ukraine, helped set the stage for Mildred's future antics as a social butterfly.
Our mother met the man she would marry and follow to the ends of the earth in 1943 at a youth group dance while he was on his way to Vancouver to be deployed as a merchant marine during the Second World War. She married her Mike in October of 1950, and they quickly began their life together in the Northwest Territories. They remained united, in joy and in grief until his passing in 2010; after raising three children, travelling the world, surviving the devastating loss of their daughter Maria, through sickness and through health, they grew old together. Their retirement years were spent travelling, visiting and caring for their grandchildren in Winnipeg and Vancouver.
Her fierce intellect and steadfast determination helped our mother achieve many goals from starting her career as a legal secretary in a small law office on Selkirk Avenue where she made a deal to work for a dollar a day in exchange for the specialized training, to retiring from The Federal Department of Justice where she always left an impression and created friendships that lasted her lifetime.
Her greatest accomplishments do not lie in her achievements, job titles or passport stamps, but in the joy she felt when she was with her grandchildren and great-grandchildren. For Mildred, her heart was never so full as it was with the love, she held for each and every one of her grandchildren and in more recent years, great grandchildren.
She leaves to cherish her memory her son Mark, daughter Michelle; nephews, Grant and George; niece Elaine; grandchildren, Katriana (Sam), Michael (Andrea), Mark, Stephanie (Navaz), Christopher, Donald, Alexander, Julia, Lara(Clint) and Jodi; her great-grandchildren, Tyler, Nathan, Kyra, Ethan, Stevie, Ari, and sweetie-pahtooty Myla.
We would like to express our sincere gratitude to the staff at Seven Oakes hospital who were there with her when family could not be; her special care-givers Teresa Bielak and Jodi Mousseau and her constant little companion Myla Jade, who's presence in her home brought great joy and entertainment in an otherwise bleak and scary world.
We will have one last party in honour of Mildred's life on Friday January 21, 2022, at 11:00 a.m. at Korban Funeral Chapel 907 Main St., Winnipeg, Manitoba. Attendees will require masks, proof of double vaccination and photo ID.
In lieu of flowers, or donations, hold your loved ones closer and cherish the moments in your lives.


"I never say goodbye, I say au-revoir. Goodbye is so final.
Au-revoir means I will see you again."
Vichnaya Pamyat


For those unable to attend, the events will also be live-streamed and recorded through the Korban Funeral Chapel Facebook page https://www.facebook. com/korbanchapel.