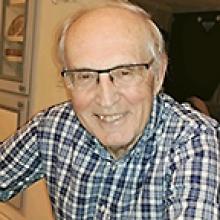 It is with a heavy heart that we share the passing of our beloved Hubert on January 12, 2022.
He will be deeply missed by his wife of 57 years Denise (Desrochers), his children Jacqueline (Doug) Dheere, Christian (Christine Maynard), Daniel (Lise Trudeau), and Nathalie (Shawn) Polinchuk, his grandchildren Sky, Isabelle, Dominic, Samuel and Catherine. They were all a source of great pride, joy, and comfort throughout his life.
Also missing him are his brothers Louis, Jean (Armande), Jules (Louise), Claude (Suzanne), his sisters Berthe, Florence, Yvette (Roland), and sister-in-law Colette. From his wife's family missing him are Léo, Edna, Donna (Roland), Janet (Edgar), Briand (Pat) as well as many nieces and nephews from the Balcaen and Desrochers families. They had a special place in his heart.
Hubert was predeceased by his parents Joseph and Madeleine (Dugas) Balcaen, his siblings Fernand, Maurice, and Lina, in-laws Georgette, Dominique, Denis, Gérard, Jeanne, and Maria. He was also predeceased by his wife's parents René and Annette Desrochers, in-laws Romain, Cathy, and Lily.
Hubert was born and raised in a large family on a dairy farm in La Broquerie. At the age of 13, Hubert left the family farm to attend boarding school at the Collège Saint-Boniface. After graduating secondary school, he continued his university studies at the Collège Saint-Boniface to complete his Bachelor of Arts. He went on to study at the University of Manitoba where he obtained his Certificate in Education and finally, his Master of Arts degree.
During his university studies, Hubert was working part-time as an orderly at the Saint-Boniface Hospital when a pretty, young nursing student from Mariapolis caught his eye. Hubert and Denise were married in 1963. Together, they settled in Saint-Norbert where they raised their four children. Hubert was a caring husband who always supported his wife Denise in her numerous artistic endeavours. He was an attentive father who aimed at instilling good values by example. He was involved in his children's lives by way of volunteering as a hockey coach, and accompanying his children to numerous sports practices, music lessons, and extracurricular activities. His children hold fond memories of the Saturday afternoons spent with papa at the Bibliothèque de Saint-Boniface where they would borrow loads of Tin Tin, Smurfs, and Lucky Luke books. Hubert was engaged in volunteering within the community where he was generous with his time. He enjoyed singing in the church choir. He was also an active member of the Knights of Columbus. A pious man of great faith, Hubert took great comfort in his daily early-morning prayers.
Hubert started his career at the University of Manitoba as coordinator of language laboratories. Soon thereafter, the university offered him a position as a French professor. Hubert was passionate about the French language and the French-Canadian culture. In teaching, it was not only important for him to teach the language and culture, but to make human connections and to inspire his students in learning. Hubert's work ethic was beyond reproach. His efforts to plan and teach meaningful classes to his students earned him a Merit Award of Excellence in Teaching. He enjoyed teaching for 30 years until his retirement in 1998.
Beginning in 1967, Hubert undertook a lifetime venture volunteering for Development and Peace. He was a true advocate for social justice and environmental issues. Development and Peace was the perfect organization for him to employ his efforts in making the world a better place. Hubert served as the first president of the local chapter in the Saint Boniface Diocese. His dedication to Development and Peace earned him the Evangelium Award. Hubert continued his work for Development and Peace in various leading roles until 2019.
In 1976, Hubert took a sabbatical leave to further his studies at the University de Laval and moved the whole family to Quebec City for one year. Unfortunately, for the first four months of the term, the university faculty was on strike. Hubert found the silver lining in the situation and spent that time with his family discovering the province of Quebec, Quebec City, cross-country skiing and sledding in the Laurentians. The wonderful memories created that year are a solace to his family.
Hubert loved sports and was a fan of the Winnipeg Jets, the Canadiens de Montreal, and the Winnipeg Blue Bombers. He played tennis at the Max Bell Centre before classes during his years at U of M. He cross-country skied, cycled, and golfed until his illness made it impossible in his later years. He was an avid reader and would read anything and everything that piqued his interest. He had a gift for writing and wrote not only for his career, but for pleasure as well.
Hubert, papa, pépère, we will miss your kindness, your generosity, your laughter, and your genuine concern for our well-being. You took good care of us and now it is your time to rest. You are one among the stars in heaven, and we will continue to love you always.
Cremation has taken place and a celebration of Hubert's life will occur at a later date.
In lieu of flowers, donations may be made in Hubert's memory to Development et Paix, 1425, boulevard René-Lévesque Ouest, 3e étage, Montréal, QC H3G 1T7 www.devp.org
Etre homme, c'est précisément être responsable. C'est sentir, en posant sa pierre, que l'on contribue à bâtir le monde.


Family and friends may view the obituary and sign a book of condolence online at www.desjardinsfuneralchapel.ca.


It is with deep sorrow that we announce the passing of our dear Hubert on January 12, 2022.
Longer obituary to follow.
Family and friends may sign a book of condolence online at www.desjardinsfuneralchapel.ca.