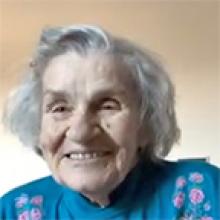 
It is with great sadness that we announce the passing of Olga "Ollie" Cottrell (nee Oktaba), on Friday, January 7, 2022 at the age of 83.
Ollie was born in Fort William (now Thunder Bay), Ontario and was raised on the family farm on Mapleward Road. She was married to William "Bill" Cottrell for 69 years. They spent a few years in Fort William before his job moved them to Goose Bay, Labrador; Winnipeg, Manitoba; Thunder Bay, Ontario and back to Winnipeg, Manitoba in 1972.
She was a mother/grandmother/great-grandmother who went to great lengths to support her family. With some of her children living in other cities she would travel without hesitation whenever help or support was needed from a chartering plane to be present when her first grandchild was born to spending over a year out of town assisting her son and his family.
When deciding how to refer to different grandparents, Ollie jokingly told her grandchildren to call her "gorgeous gramma". Their home was open and welcoming to those passing through and those in need. In keeping with her Ukrainian/Polish background she made delicious cabbage rolls, perogies and borscht. She was a self-taught seamstress who made clothes for her children when they were young, and as they grew made dance costumes for them, and then for her grandchildren and a Ukrainian dance group.
Ollie worked evenings and weekends when her children were young in different in-home sales such as jewelry, Avon and Tupperware. When they were all in school she worked in Zellers both in Thunder Bay and then in Winnipeg. From there she trained to be a Real Estate Agent and worked as such until her retirement. Long before "staging homes" became common, she assisted many of her clients prepare their homes to the extent of painting rooms and doing minor renovations.
After a brief hospital stay, Ollie moved to Golden West Centennial Lodge in June 2021 following an unexpected heart-breaking diagnosis of late stage cancer. We thank the staff for your care and compassion during the time she spent with you.
She is survived by her husband Bill and their five children, Lynda (Ben Kitzan), Terry, Doug, Les (Lori), Warren (Teresa), ten grandchildren and eleven great-grandchildren, Kyla (Mike Fenton, Julia, Kaelyn, Allie), Aleisha (Duane Armstrong, Mya, Luca, Eli), Jason, Morgan (Emily, Cory, Nicholas), Amy (Alexis, Kayleigh) Patricia, Ian, Bryce, Erin, David, sisters-in-law, Georgina Henderson, Susan Oktaba and many nieces and nephews.
She was predeceased by her parents, George and Katherine Oktaba, siblings, Josie France, Rose Merlo, Stella Shchepanik, Bill Oktaba, brother-in-law Walter Shchepanik and former brother-in-law Leo Merlo.
Due to the current public health restrictions, cremation has taken place with an interment and memorial service planned for a later date.
If friends so desire, in lieu of flowers, donations can be made to a charity of your choice in Ollie's memory.