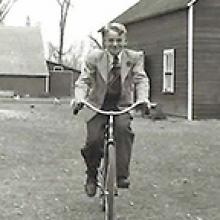 
We are saddened to announce the passing of our father, Bernie Doerksen on January 11, 2022.
He leaves behind five loving children and their families, Ty (Patsy), Heather (Brian), Yvonne (Ken), Stewart (Kathy) and Tracy (Greg); along with grandchildren, great-grandchildren, and great-great-grandchildren, too many to count.
Dad was the youngest son born on August 3,1933 in a traditional Mennonite house barn in the village of Neubergthal, Manitoba. His growing up years were spent on the family farm which included a frozen dugout where he could work on his skating skills. Dad played on the village hockey team, Neubergthal Aces and later went on to play with the Altona Maroons. In 1953 to 1954 he became a local hero and that notoriety attracted the attention of who would become the love of his life, Kathy Funk, our mother. Shortly after their marriage they moved from Altona to Winnipeg and lived in the St. James area while raising their family.
Dad had an infectious smile that would light up any room that he entered. His charismatic personality made for a prolific career in sales while working for both Eaton's and Sears. While working for Eaton's he reluctantly accepted the position of Operations Manager for Western Canada. Although it was a step upward in his career, he humbly returned to selling where his people skills would shine as he met and helped people.
Another important legacy are the numerous relationships developed over 50 years of his involvement in the AA Fellowship. His commitment to his own health, his family and carrying the message to others made him a cornerstone for the group he attended in St. James. For the entire 50 years Dad remained in the same AA group. He was known as an old timer and his mentorship and speaking abilities were sought by many. The love that Dad had for his brothers and sisters in the fellowship is not something to be duplicated. He was one of a kind! We, the kids, enjoyed many Birthday Meetings where he would be presented with his cake and another pin. As the years went by we would take our turn in presenting him with that cake. Many people have been positively impacted by the role that he played in the AA program for which he was deeply proud and grateful at the same time.
In lieu of a funeral at this time there will be a Celebration of Life later this spring; more information to follow.