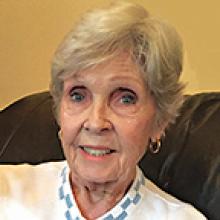 
It is with profound sadness that we announce the passing of our loving mother on Tuesday, January 11, 2022, just shy of her 88th birthday at Markham Stouffville Hospital.
Noreen was predeceased by her parents, Joseph and Sadie Adams and stepfather Mason Faulkerson, sister June Blake and sister-in-law Margaret Adams. She leaves to mourn, her three loving children, Laura (Bill), Ian (Dale) and Colin (Sharon); nine grandchildren, Reid (Mandy), Brendan (Whitney), Jaclyn (Bryan), Brent, Brooke, Geoff (Isabel), Erin (Robin), Kathleen (Anton) and Brittany Craik-Reid. Noreen (GG) was truly blessed to have nine great-grandchildren, Bentley, Lily, Emily, Briar, Adam, Liam, Owen, Ella and Lucas. She will be dearly missed by her siblings, Robert, Jeannie, Josephine and all of her nieces and nephews.
Noreen was born and raised in Burlington, Ontario and later moved to Winnipeg, Manitoba after being swept off her feet and proposed to by the love of her life, Dave Reid, in Lindsay, Ontario whom she married in 1954. They resided in Fort Garry and raised their three children. Noreen was quite a seamstress sewing most of her and Laura's wardrobes over the years. We believe that she invented the racing suits that the downhill skiier's wore. Colourful, skin tight, state of the art suits that were crafted for Ian and Colin. She was active in bowling, golfing, curling and bridge. Later in life bridge became the primary activity and social life for both Noreen and Dave. They travelled the world including a trip back to their families' original homesteads in Ireland, Scotland and England. Other destinations included Bahrain in the Persian Gulf, Venezuela, Australia and New Zealand, France and several winters in Fort Myers, Florida and Puerto Vallarta, Mexico.
Summers were spent at her beloved cottage at Victoria Beach, Manitoba with family. They remained in Manitoba for over 20 years until Dave's job brought them back to Ontario in 1973. Due to the very unique community at Victoria Beach she continued to return each summer for close to 60 years. This truly was her "Happy Place"!
Noreen was a true animal lover! She grew up with animals of all kinds and was completely and totally dedicated to her dog and cat, Smokey and Abby who were so much a part of the family. Noreen donated to The Toronto Humane Society on an annual basis.
Noreen will be remembered as a loving mother who was devoted to her children, grandchildren and nine great-grandchildren, loving every moment that she spent with them.
The onset of dementia in 2017 found her residing in assisted living at Amica, Swan Lake and later at Sunrise in Unionville before moving to long term care at Bethany Lodge. A very special mention to Cathy, a PSW at Amica who was a very dedicated caregiver and a true friend to Noreen.
Prior to moving to long term care Noreen was in transitional care at Markham Stouffville Hospital for a period of five months which kept her safe and cared for during some of the Covid times before moving to long term care at Bethany Lodge. Thanks to Cecily, Miranda and all the staff for their dedication and support during her stay. Thank you to the doctors and nurses at the hospital for their constant communication and compassionate care throughout. Comforting words from palliative care nurse Andrea will always be remembered…


"The angels are coming and they will only come when she is comfortable and peaceful so as not to have a troublesome journey to heaven". May she be reunited with her loves, Dave, Smokey and Abby.


Due to Covid restrictions a memorial service will be held at a later date.
In lieu of flowers, the family asks you to consider a donation in Noreen's memory to The Toronto Humane Society or a charity or your choice.


Condolences can be left at the
Kane Jerrett Thornhill website.
www.kanejerrett-thornhill.ca