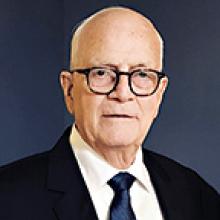 
Peacefully, after a brief illness and surrounded by his family, Guy passed away at the St. Boniface Hospital, on January 18, 2022, at the age of 90 years. A man of great faith, he was aware that the Lord was calling him, and of the glory that awaited him.
He leaves behind his wife of 63 years Marlene; and his four children, Donna Komishon (James); Robert (Catherine); Brian (Kimberley); Kenneth (Janine). Grandchildren, Allison (Stefan Bars), Lindsay, Christopher (Brittany) Komishon; Matthew (Emily Raymond), Anne (Tyler Miller), Jane (Seun Okusanya), John; Darby, Mae, Sean; Spencer, Jordan; great-grandchildren, Wesley Bars, Kayode Okusanya, and Archie Miller (born the morning of January 18, 2022).
He also leaves behind many relatives and friends, including first cousins, Lee Downey, Carol Bordass, Joan Lytwyn, and Danny Coughlin (Mary) and Joan Madden, who were more like his brother and sister than cousins.
Guy was born in Winnipeg on May 23, 1931, and was the only child of Helen and Cornelius Coughlin. He was raised on Spence Street where he lived with his parents and extended family including his cousins, Danny, Jimmy, Joan, and Paul Coughlin. He attended St. Mary's School in downtown Winnipeg. At the age of 10, Guy and his parents moved to Deloraine, MB, and grew up in a rural setting while his father was a cattle buyer. When they moved back to Winnipeg they lived on Grosvenor Avenue. He attended Earl Grey School, then Kelvin High School.
After high school, Guy landed a job at Norwich Union Insurance Company where he worked as a marketing representative for 20 years.
He met the love of his life Marlene Cantwell at a St. Ignatius Church bowling event and they married May 17, 1958. After having their first two children in Winnipeg, they were transferred to Thunder Bay, ON and had three more children; including Joanne, who died shortly after birth. In Thunder Bay they met many dear, lifelong friends.
In 1967, they moved back to Winnipeg with four children and settled on Centennial Street. Guy was very active at Sir John Franklin Community Centre calling bingo and shovelling hockey rinks in his spare time.
His insurance career changed when he started his own insurance brokerage in 1971, Guy Coughlin Insurance Agency. Guy and Marlene started the business with no clients in the unfinished basement of the house, with a family of four children to support. We are so proud of what he created. His legacy lives on through his children and grandchildren in the insurance business.
His life was much more than his career. It was his family and his faith that were the most important things in his life. Guy and Marlene were inseparable enjoying 63 years of marriage. They travelled many places together with family and friends. They were so very proud of their children and grandchildren.
Guy was an active long-time member of St John Brebeuf Parish, raising four children in the church and school. His faith was very important to him, and it was his core. He served on the Parish Council, School Board, and was a 4th Degree member of the Knight's of Columbus. He was also President of the Serra Club of Winnipeg, and the Serra Club of Canada which supports vocations to the priesthood and religious life. One of his greatest honours was, as part of the Serra Club International, he met and shook hands with Pope Francis at the Vatican.
Guy was such a kind-hearted man. He would be the first to stop and help anyone with car trouble. If someone took the bus to his office to pay their insurance, he would insist on driving them home. He would meet strangers touring the city and drive them around on a three hour city tour. His kindness was completely instinctive and knew no bounds. We are all better people from knowing and loving Guy Coughlin.
Cremation has taken place, and a funeral will be Tuesday, January 25, 2022, at 11:00 a.m., at St. John Brebeuf Church.
Attendance at the church for the funeral will be limited to 50% capacity with COVID protocols in place. Those wishing to attend must pre-register by sending their name referencing Guy's funeral or request a link to the live stream to admin@wojciks.ca
If you wish, donations in Guy's memory may be made to either the Serra Foundation of Canada, or the Holy Names House of Peace.


On Tuesday, January 18, 2022, Cornelius J. (Guy) Coughlin passed away at the St. Boniface Hospital at the age of 90 years.
A longer obituary notice to follow.