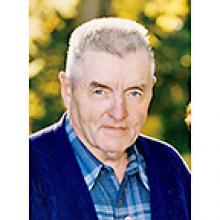 
It is with heavy hearts that we announce that Walter Stevens, aged 95, of Gimli, peacefully passed away at home, on January 13, 2022.
Walter will be sadly missed by his loving wife of 67 years, Betty; his children, Lori, Joan (Morris); his grandchildren, Nicole, Harley (Jaye), Rylee (Myranda), Chelsea, Jesse (Jessica) and Tyson (Emily). Afi is also survived by his great-grandchildren, Shawn, Pearl, Holly, Freya, Tryggve Walter, and Jaylee; in-laws, Alice McLaren, Anna Stevens and Gudni Magnusson; as well as many nieces and nephews.
Walter was predeceased by his parents, John and Ranka Stevens; Betty's family, Stephania, Bjarney and Tod Bjarnason; all of his siblings; and son-in-law Frenchie Ouellette.
Dad worked for the Air Force Base as a heavy equipment operator, and then at Seagram's until his early retirement. He was a jack of all trades and could fix almost anything. Dad loved spending time at the farm in Camp Morton gardening, planting, growing, pruning and grafting fruit trees, tuning up his stationary engines and enjoying a cold one after his labours. We enjoyed many family barbeques together there over the years.
A private family gathering will be held in the summer.
The family would like to extend sincere thanks to Dr. S.V. Patel and Dad's wonderful home care workers.
In lieu of flowers, a donation may be made to the Evergreen Basic Needs, Box 89, Gimli, MB R0C 1B0


A Glimpse from the Past,
by niece Jamie Magnusson


My Uncle Walter's accordion tunes filled every family gathering. If it was far enough into the evening, there was dancing. The Stevens sisters, Walter's cousins, sang harmonies because that's how they practiced in church. My Dad played the guitar or piano, Uncle Franklin would play the button accordion. No one had ever taken a lesson in their lives and yet they could mysteriously play anything and bring any space to life.
Walter could take apart the most complex machinery and restore it. He had no formal mechanical training, but he could fix anything. One of my treasured memories was Uncle Walter inviting me to play an old pump organ he had in millions of pieces and then meticulously restored and assembled.
Uncle Walter was the only person in the world who called me "Jimmy James". I loved that. Walk well Uncle Walter and thank you for the precious memories.