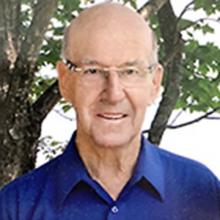 
On Saturday, January 15, 2022, at 10:35 a.m., on the liturgical feast day of Our Lady of Banneux, Mother of the Poor, Léon Paul Joseph Palud, a devout son of the Blessed Mother, peacefully entered eternal life having received all the comforts of the Sacraments of the Church at the hands of his priest-son, with his beloved wife and youngest son at his side, and the rest of the family having joined from Quebec in prayer through virtual means in his last hours.
Léon Palud was born on February 8, 1932 in Aubigny, Manitoba, the son of Edna Bouchard and Jean-Marie Palud, a French-Breton immigrant – a heritage which was dear to him. He was the beloved husband of Rose-Marie (Faucher) Palud for over 61 years. He also leaves to mourn his children, Monsignor Michel Palud, C.O., Religious Sister Suzanne Palud, O.FF.M., Stéphane and his wife (Isabelle Joubert) and their children, (Anne-Catherine, Charles-Etienne, Mariam, Antoine, Victoria and Laura-Marie), and Christian and his wife (Jacinta McAvoy) and their children, (Marie-Hélène, Cédric, and William).
He is also survived by his siblings, Rose Laramée (Joseph), Monique Lajoie (Paul deceased), Claudette Veilleux (Jean-Paul) and his brother Louis. He was predeceased by his siblings, Yves, Henriette and Robert. He was also beloved to his in-laws on the Faucher side and thus leaves to mourn, Roland (Kathlean Noonen), Gisèle ( André Mestagh), Jocelyne (Marcel Bonneville), and Lucille (Richard Sylvestre). He also leaves to mourn many nephews and nieces and great-nephews and nieces and innumerable friends and beloved neighbours of 500 Taché.
Farm life was at the heart of Léon's existence. He was a jack of all trades and could fix anything that was fixable. He loved to walk through the fields when the crops were growing, especially on a Sunday afternoon when he would take his family 'faire le tour des terres'. A man always close to God and Nature he passed on these values to all who came in contact with him. Even in the busiest moments of the harvests and hard work on the farm he always found time to go to Church and to come and recite the rosary with the rest of the family in his work clothes. He was also very interested in the missionary work of his son Michel in Jamaica. He volunteered time and talent and treasure a number of times in the outreach of the poor for the Jamaica mission.
Léon always had a joyful disposition and to his dying day loved children. He loved to joke, whistle and tease and till his last moments was the World's Champion for cribbage. Wherever he travelled in the world, he brought his trusty 'crib board' and it seems his lucky stars never left him. Even after his stroke and a mild form of dementia set in, he still could play cards and give a 'skunk' to whoever tried to outdo him!
He will be sorely missed, but in the light of God we feel his presence and almost can see the twinkle of his eye. May he rest in peace.
The funeral will take place in summer, arrangements to be announced.
In lieu of flowers, you may donate for the Jamaica Mission to, 'Friends of the Congregation of the Oratory' c/o Joël Gosselin, 60 Riverbend Avenue, Winnipeg MB, R2M 2N6.