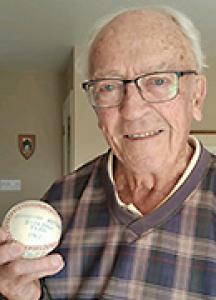 MACKAY: Peacefully on Saturday, January 22, 2022 in Brandon, MB. Gerry MacKay passed away at the Brandon Regional Health Centre at the age of 91. Born on the farm at Kenton, Manitoba on February 19, 1930 he was one of four children born to Glendon "Curly" and Agnes (Barr) MacKay. He was predeceased by siblings, Darcy MacKay and Lois Duffield. The youngest of the four, Loree Hays, still resides in Victoria, BC. The MacKay family moved briefly to Shoal Lake from Kenton before moving to Brandon in 1946 when Curly purchased what was then known as Brandon Harness Ltd., later to become Curly MacKay & Sons Sporting Goods. Upon moving to Brandon, Gerry became involved in many sports at the high school level but soon after he finished school he became very involved in playing baseball. The prosperity of the sporting goods store allowed Gerry to fully enjoy what he liked to do, play sports! He became well known for his great play in baseball, curling, and golf. He was provided a golden opportunity to play with the Brandon Greys, given Curly's friendship with then coach, Ian Lowe. He spent 1949-51 with the Greys and then another golden opportunity became a reality when he was given a chance to play professional baseball in the United States. His first year in pro ball was in 1952 with the Sioux Fall Canaries where he played against youngster, Henry "Hank" Aaron. Gerry and Hank competed for the best batting average in the league. Another highlight of his time in pro ball was playing a game against the Boston Red Sox and his idol, Ted Williams. Both he and Gerry played left field. Gerry sprinted to left field during an inning change and got the chance to shake Ted's hand. His pro career ended in 1955 but not after being invited to the New York Yankees training camp for the 1956 season. In 1956, the Yankees outfield included Mickey Mantle and Roger Maris. Gerry chose to stay in Manitoba and resume baseball there. Gerry enjoyed many great years playing with the Brandon Cloverleafs. In 1966, he was approached by organizers of the Winnipeg Pan-Am Games to assemble the very first Team Canada national baseball team to compete in Winnipeg in 1967. He and great friend and baseball player Gladwyn Scott had only months to put a team together from players across Canada. The team became comprised mostly of players from Manitoba. Although the team didn't fair well in the event, the birth of a national baseball team concept was realized. Gerry went on to coach more Team Canada teams at World Baseball Championships in 1971 (Cuba) and 1972 (Nicaragua) and the 1971 Pan-Am Games in Cali, Colombia. He was recognized as Western Manitoba's Sportsman of the Year in 1968. For all his work at the national level, he was inducted into the Manitoba Sports Hall of Fame in 1990 as a Builder in Baseball. His remarkable play in baseball led to many inductions into the Manitoba Baseball Hall of Fame as a builder, player, team member, and to an outfield position on the All Century Manitoba team. People who didn't see him on a baseball diamond may have seen him on a golf course in Manitoba. Gerry became very well known for his play at tournaments, including the Tamarack at Clear Lake, where he won the event five times in a nine year span. However, he really enjoyed his golf friends in their own fun golf tournament known as the Tarnished Leaf. He also had a lot of fun competing in the Snow Golf championship in 1976, winning the tournament. He then went on to BC and played at the national event. And then there was curling. Gerry competed and won a couple of "Buffalos" at the Senior Men's provincial level but also immensely enjoyed the game at the local level with fellow curlers. Being the complete sportsman, Gerry spent many seasons hunting all game, but mainly geese. It was the mighty Canada Goose that had Gerry teaching his physician, Dr. Tegg, the skill of the hunt. These conversations sparked a very good relationship between the two right up until Gerry's passing. Besides playing sports, Gerry provided countless hours of volunteer work in various matters including the creation of the Manitoba Baseball Association, the Manitoba Baseball Hall of Fame and the Senior Men's Curling Super League in Brandon. Gerry was predeceased by his wife, Anne (Campbell) MacKay of Dunrea, MB in 2012. He is survived by his three children, Gary, Gordon and Lisa and their families. A funeral service will not be held at this time but the family expects to hold a Celebration of Gerry's Life in the spring or summer of 2022. Details will be announced at a later date. In lieu of flowers, if friends desire, donations in memory of Gerry can be directed to the Canadian Cancer Society, 415 1st Street, Brandon, MB. R7A 2W8.