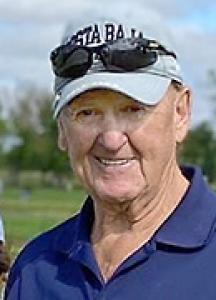 CLELLAND, Roy William. We are sad to announce the passing of Roy William Clelland on January 24, 2022 at the Brandon Regional Health Centre at age 73. Roy was one of four boys born in Deloraine, Manitoba to Ed and Vi (nee Beedie) Clelland. Roy and Karen met in their teens and married in 1967, making Deloraine their home. Carla was born in 1970 and Monica followed in 1973. Roy was supportive in everything his girls decided to do. And he was extremely proud at how successful both daughters had become, never missing an opportunity to tell them. Roy was over the moon when his two grandsons came along, they were the absolute center of his life. And he was to theirs as well. In his youth, Roy was involved in sports, playing both hockey and baseball. He also loved playing poker and blackjack and developed many good friendships within those circles as well. However, his real passion was golf. He played as often as he could and loved going to tournaments such as the Big Rock Classic and Antler Creek. He treasured the time he was able to spend with his son-in-law Craig, they were definitely two peas in a pod. He came home with more than a story or two and loved the camaraderie at the 19th hole of the course. Roy often told stories of good memories with many different golfing buddies, even back in the day travelling down to the country club in Minot with his good friend the Jeweller. Roy was extremely proud to have coached the 1970s Deloraine Royals through their dynasty years. This incredible team won six straight championships in the Southwest Hockey League on an amazing run from 1972-1979. One of his proudest life moments was to stand with the rest of this amazing team when they were inducted into the Manitoba Hockey Hall of Fame. Never one to remain idle for long, Roy enjoyed a number of careers throughout his lifetime including managing the legion and the golf course in Deloraine. The one that meant the most to him turned out to be the last, his 'semi-retirement gig' driving the shuttle for Forman Honda. He enjoyed chatting with many different customers and always felt part of the dealership family, thanks to Paul, Kent and the rest of the team. Despite the challenges he faced throughout his life and especially this past year, Roy always had a smile on his face and looked for the positive in any situation. He was determined to get through these surgeries and get back to his boys and back onto the golf course. Unfortunately, omicron did not agree and the fight was just too much for him. He will be missed by many with his kind and generous spirit. Although he did not have a lot, he would give everything he could to help someone out. Roy will be lovingly remembered by his wife Karen and daughters Carla (Craig Richardson) and Monica Lamport (partner Kevin Ruddick), grandsons Wyatt (and his dad, Wes Lamport) and Tyler, brothers Bob (Kathy) and Gary (Debbie), sister-in-law Helen King as well as, several nieces and nephews and their children. He will also be missed by the Clelland cousins Stewart, Lorne, Wayne, and Darlene along with their families. Along with many hockey and golf buddies, friends and acquaintances. Roy was pre-deceased by his parents and brother Allan and special mother-in-law Eva Christensen. A celebration of Roy's life will be held at a future date. Donations in memory may be made to the Heart and Stroke Foundation.