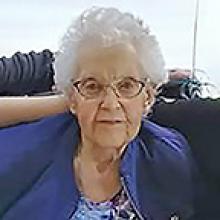 Peacefully on Monday, January 10, 2022, at Tuxedo Villa, one month before her 102nd birthday, Janey Harrison went to be with her Lord and Saviour Jesus Christ.
Janey is survived by her two daughters, Patricia (Brian) Maxwell and Elizabeth Johnson; daughter-in-law Allison; nine grandchildren: Renelda (Wes) Hird; David (Shawna) Friesen; Barry (Cheryl) Maxwell; Jill Maxwell; Robin (Brian) Flanagan; Jessica Harrison; Grace (Jeff) Pinck; Andrew Harrison; and Emilee Harrison; 18 great grandchildren and three great-great grandchildren, along with numerous nieces, nephews, cousins and special friends. She was predeceased by her husband Noel, her son Tom, her grandsons, Darren and Matthew, and her sister Betty.
Janey was born in Winnipeg in 1920, the second daughter of Scottish immigrants Tom and Christine Cossar. She developed many friendships throughout her childhood and teen years, and at the family cottage in Gimli where they spent their summers.
After high school Janey completed a stenographer course (secretarial now) then pounded the pavement for a year to finally get a job during the depression.
Janey met her husband, Noel Harrison just before the Second World War. Noel enlisted in the Navy in 1939; Mom followed in 1942 as a secretary. Both were stationed in Halifax. They were married in Winnipeg in 1943 while on leave for a week, then back to Halifax. Janey's mother had five days to make the wedding dress, bake the wedding cake and arrange the wedding.
After the war Noel and Janey lived in Winnipeg in River Heights where their three children, Patricia, Elizabeth and Tom were born. Janey was a stay at home mom when the kids were young, as were most wives in those days. She was a terrific cook and an accomplished seamstress making most of her children's clothing, as well as her own.
Janey loved music especially when Noel played the piano, his favourite pastime. Throughout her life she met any problems head on with a feisty determination, and good humour. She had a sparkling personality with her flashing blue eyes and ready smile. Because of her caring nature and genuine love for others Janey had many lifelong friends. She loved spending time with her grandchildren and especially loved babies, having a calming effect on them. Her husband Noel called her "the love of my life".
After Noel passed away in 2009, Janey eventually moved into an assisted living facility at the age of 93, and into Tuxedo Villa at age 98.
We would like to thank the wonderful staff at Tuxedo Villa for their exceptional care and genuine love for Mom. You have been a blessing to us.
A private celebration of Janey's life will be held at a later date.