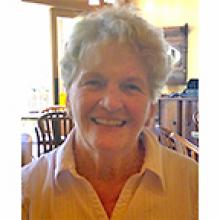 
Laura has left this planet to be with her beloved husband Mike of 54 years, after spending the last 11 years without him, and spending every moment reminiscing of their wonderful life together. She left on Wednesday, January 19, 2022, surrounded by her loving family in the comfort of her home, and with the help of Medical Assistance in Dying and the caring members of their team who fulfilled Laura's last wishes.
Laura was born on April 18, 1937 in Winnipeg. She was raised by her loving parents, Harry and Evelyn Dean; she spent some of her younger years on a farm near Whitemouth, and then later came back to Winnipeg where she graduated from Daniel McIntyre Collegiate. Shortly afterwards, she met the dashing Mike Anderson who swept her off her feet, which led to marriage in 1956 after only six months. Marrying Mike ended up being the best decision Laura ever made. She was 20 when she started her family and gave birth to her first son Dean, with Doug arriving two years later. Laura also suffered the loss of a baby girl, which, despite Laura surviving cancer five times, was one of the hardest things she had to face in her life.
Mike's career at CPAir allowed Laura and her family all the opportunities they could have ever hoped for, making lifelong relationships, and travelling the globe in style while always getting a deal, whether it be for tickets on a vacation, or various wares at a garage sale.
She leaves behind her awesome family, her two boys, Dean (Paula) and Doug (Debbie); her grandchildren, David, Geoffrey, Ricky, Robert and Will; as well as countless other friends and family. Seeing her in such high spirits during her last moments on this Earth assured all of us that this was the most peaceful way to go, with her last words being a cheeky "I hope this works.".