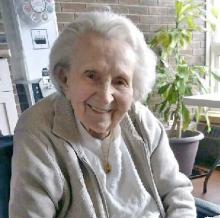 
Olga was born in Beausejour, MB to Ignace and Alexandria Buyarski. She is predeceased by both her parents, her brother Frank Buyarski and sister Anne Smith.
Mom spent her early years on the family farm in Beausejour. As a young girl, she was known for her stubborn streak which may have passed on to one or both of her sons.
As a young adult, she lived and worked in Winnipeg before marrying Ross Hnatiuk in 1954. They lived and worked on the Hnatiuk family farm in Kirkness, MB until Ross passed away in 1964, leaving mom to raise their two sons, David (Mary) and Paul (Susan) alone on the farm with her mother-in-law.
Olga worked as a cook in the Selkirk General Hospital, Betel Home and Maples Nursing Home while her sons were growing up. She was a life-long member of the Ukrainian Catholic Women's League and a devoted member of her church.
Olga was loved dearly by everyone who met her, and she held closely to those friendships until her final days. Her cherished memories were those with friends at Father Bozyk's cottage in the Whiteshell, multiple trips to Florida, a special trip with sister-in-law Anne to California and one with her sister-in-law Irene to New Mexico.
Mom was blessed with five grandchildren, Kathryn (Tony), Mark, Andrew (Mandy), Stephanie (Dan) and Andrea and six great-grandchildren, Taylour, Chloe, MaKenzie, Madison, Zachary and Finley.
Funeral Liturgy will be held on Tuesday, February 1, 2022 at 10:00 a.m. at Holy Eucharist Ukrainian Catholic Church on Watt and Munroe. Due to the current pandemic situation, anyone attending should be double vaccinated and, with limited capacity at the church, the mass will also be live-streamed at holyeucharist.ca for those friends and relatives who wish to attend remotely.
In lieu of flowers, donations can be made to a charity of choice in Olga's name.
Pallbearers are David Hnatiuk, Paul Hnatiuk, Mark Hnatiuk, Andrew Hnatiuk, Stephanie Hnatiuk and Andrea Hnatiuk.
Condolences can be left on her tribute wall at www.gilbartfuneralhome.com