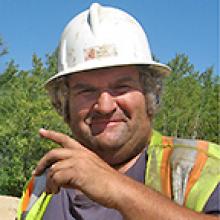 
Suddenly, while on the job at Muskrat Dam in N.W. Ontario, Keith passed away at the age of 60.
He is survived by his loving wife of 42 years, Lois (nee Benedictson). He is also survived by his daughters, of whom he was immensely proud: Melissa (Barry) Hopman, Christy (Adam) Putz, Rachelle (Jim) Manness and Megan Hnatiuk; grandchildren, his pride and joy: Sebastian, Caleb and Charolette Hnatiuk; his sisters, Lois Matis (Rod Boles), Lorine (David) Waters and Beryl (Rudy) Singbiel; Lois's family and numerous nieces and nephews. He was predeceased by his parents, Clifford and Rosella Cook; his brother-in-law Steve Matis; and niece Shelley Matis.
Keith grew up in the Komarno area where he farmed with his parents, married and raised his family. His spontaneous adventures with his family made many wonderful memories. He learned to operate Cat dozers as a teenager. About 10 years ago, he and Lois decided to start their own construction company, K & L Contracting Ltd., completing many projects across Manitoba.
He was looking forward to retirement this fall and spending their winters in Texas. He wasn't one to shy away from sharing his opinion, but he had a heart of gold, helped family and friends whenever he could, especially if it involved something with more than 100 horsepower! He took co-workers and employees under his wing, mentoring them in both work and life skills. He always had everyone laughing and was the life of every party, especially with his competitive spirit.
A special thanks to Clayton who went above and beyond when we couldn't be there.
A private memorial will be held at a later date.