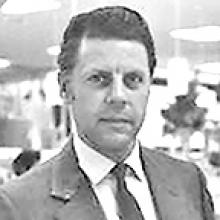 
On February 2, 2022, our dear father Derek Davis passed away after a lengthy decline in health.
He is predeceased by his second wife Catherine, his mother May, and father Reginald, and his three sisters, Sheila, Nina and Carole.
He leaves to mourn his sons, Mark (Catherine) and Paul, as well as two grandchildren, Jessica (Zach) and Jordan, and his eldest son Grant. Also, left to mourn are his stepsons, David (Barb), Scott (Anna) and their children.
Derek was born in Bournemouth, England March 22, 1933. Derek spent several years in the banking industry in England before immigrating to Canada with his first wife (Carol) in 1966.
Once in Canada he worked for Simpson Sears Company and was transferred to Thunder Bay, St. John, NB and finally Winnipeg where he retired. He loved spending time talking and visiting with his sons Mark and Paul, and his grandchildren Jordan and Jessica. Their Saturday morning breakfasts were loved by all who attended although greatly interrupted by the pandemic.
Derek was a talented man, he built numerous basements by hand which were very professionally done and enjoyed by all. He was also very good at repairing anything that needed it.
He loved his homes and his gardens, and kept them meticulously in tip top condition.
He enjoyed his Blue Bombers and was a season ticket holder for many years.
It is the end of an era - an honest man who always said it like it was and a man who had unwavering loyalty to his family.


He will be sadly missed but not forgotten - Rest in Peace dear old Dad.


At his request, cremation has taken place and no formal funeral service will be held.
The family offers their sincere gratitude to the Victoria Hospital staff for their kind care and attention during his stay.