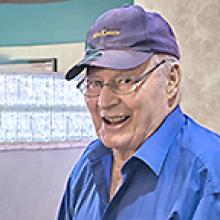 
Alistair Wheeldon MacKenzie, aged 93, of Carman, passed away peacefully in his sleep on February 18, 2022.
He was born on September 1, 1928 to Alistair and Gladys MacKenzie of Winnipeg and was predeceased by his brother Donn Gary in 1998.
Al is survived by his wife of 64 years, Ruby (nee Taylor), and their three children: David (Nicola), Heather (Brent Parkin) and Scott (Melanie); five grandchildren: Jennifer (Keith Merk), Kevin Smith, Angel MacKenzie, Cadence and Kalia MacKenzie, and two great-grandchildren: Dylan and Clarissa Merk.
He farmed in the Carman area for 51 years, raising Hereford cattle and mainly grain crops until he retired in 2012, when he and Ruby moved into Carman.
Funeral service for vaccinated individuals will be held on Thursday, February 24, 2022 at 2:00 p.m. at the Carman Church of Christ.