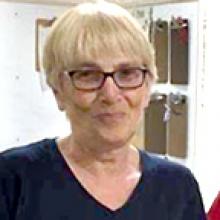 
It is with deep sadness we announce the peaceful passing of Marilyn Arleen Ross of Rockwood on February 18, 2022. She passed away peacefully at home after a lengthy battle of metastatic breast cancer with her husband Jim, daughter Shannon and grandson Christian by her side.
Marilyn was predeceased by her parents, Henry and Evelyn McMahon; her son James (JJ) Ross and her brothers-in-law, Lenny, Doug and Ricky.
She will be lovingly remembered by her husband Jim; daughter Shannon (Rod); grandson Christian; as well as her brothers, Brian (Sue), Wayne (Yvonne), Darrell (Darlene); sister-in-law Patricia Macsymic (Darren); brother-in-law Paul; as well as many nieces and nephews. She will also be missed by many friends in both Manitoba and Arizona.
Marilyn was born in Errington Township, Ontario and raised most of her life in Winnipeg, Manitoba and has resided in Stonewall area since 1994. She attended DMCI and the University of Winnipeg, graduating with a BA in 1973. This is where she met her husband Jim and spent the next 50 years together.
Marilyn worked at the Manitoba Youth Centre for over 30 years in various positions including Supervisor, Manager, Staff Training and Recruitment, Deputy Superintendent and Operations Coordinator. There was no halfway with her, each responsibility she had was given her full commitment.
Marilyn was always active outside of work and had no trouble keeping herself busy. Marilyn was a voracious reader and an enthusiastic flower gardener. She enjoyed, camping, fishing, fly tying, wood carving, wood working (intarsia), web design, quilting, sewing, crocheting, and travelling throughout Canada and the US with her family. She later enjoyed trips to both Mexico and Cuba before settling into retirement with a winter home in Arizona.
Marilyn was an avid dog lover and spent over 30 years training and participating in many dog activities. It was at these activities, that she made many lifelong friends and travelled all over North America for Flyball Tournaments.
After retirement, Marilyn learned to golf and spent many days golfing with friends and family. Her love of football was very well known. She was an avid Winnipeg Blue Bomber and Pittsburgh Steelers fan and spent most of her Sunday's watching CFL and NFL.
We would like to extend our gratitude to special friends throughout her illness, Susan and Murray Spence, Joe and Michelle Cardwell, Kevin and Nicola Hughes, Wayne and Linda Stannard and Christie and Tim Williams. We also wish to thank her Cancer Care team including Palliative Care and Home Care for the exceptional care she was provided.
As per Marilyn's wishes, there will be no funeral service and cremation has already taken place. A private gathering will take place at a later date.
In lieu of flowers, a donation can be made in Marilyn's name to CancerCare Manitoba, The Humane Society, or a charity of their choice.