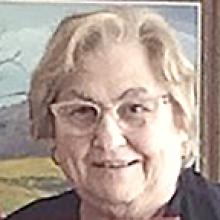 
With great sadness, we announce the peaceful passing of Evelyn Yvonne Kilbrei (nee Sine) on Tuesday, February 15, 2022.
Yvonne was born, April 3, 1949 to Clifford and Nellie (Martin) Sine and was raised in Arborg, MB alongside her older brothers, Keith and Gerald. Yvonne spent her youth growing up in Arborg, participating in the Winter Festivals, 4H club, ice skating and sewing competitions, while making many lifetime friends.
Yvonne married the love of her life, Richard on February 26, 1966 and on March 8, 1969 they welcomed their son Robert James to the world. Tragically, Richard was killed in an accident on July 1, 1972. With strength and passion, Yvonne and Robert moved to Winnipeg to begin their new chapter in life.
Yvonne retired from Family Services after 30 years, as a Payroll Administrator. Yvonne loved fashion. She dressed to impress with matching shoes and purses and wore hats on special occasions. Yvonne's most cherished times were spent in a hockey rink watching Robert play goal. His teammates affectionately called her Evie and knew that she could always be counted on for rides to and from games. Hockey games and tournaments gave Yvonne and Robert the opportunity to travel across the country as well as two trips to Europe. The rink was a second home to Yvonne, and she enjoyed sharing her hockey stories. Even this last decade, she was still standing at the goal side watching her beloved granddaughter Elliot play the game. Yvonne enjoyed spending time with Elliot and took tremendous pride and joy in all of Elliot's success. Many memories were created and they were able to celebrate her high school graduation in June 2021.
Yvonne is survived by her son Robert (Allison); granddaughter Elliot; step-granddaughter Alexandra (Chad) and step-great-grandchildren, Parker and Milo.
Yvonne is predeceased by her husband Richard Kilbrei (1972); parents, Clifford Sine (1970) and Nellie Martin Sine (1998); step-father Thomas Alexanderson (2004); brothers, Keith Sine (2021) and Gerald Sine (1999). She has now joined them for a good game of cribbage and to watch the Habs.
The family would like to thank the amazing staff at Riverview for caring for Yvonne during her last two weeks.
Cremation has taken place and a burial service will be planned in Arborg in the coming months.


KORBAN FUNERAL CHAPEL
(204) 956 - 2193
Condolences may be sent to
www.transconafuneralchapel.com