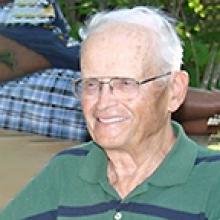 
Peter Melnyk passed away peacefully in his sleep on Thursday, February 24, 2022, at the age of 94.
Peter was born on November 8, 1927, in the Municipality of Rossburn, Manitoba, the youngest child and only son of Anne and Nicholas Melnyk. Peter was predeceased by his loving wife of 52 years, Faith (nee Germak) on October 28, 2013; his parents, Anne and Nicholas; sisters, Anne (Paul) Gensiorek, Gladys (Tony) Sawchuk, Margaret (Peter) Kostiuk, Merle (John) Sysa, Natalie (Joe) Keller, Dorothy (Stanley) Sobieski, Olivia (Bill) Boychuk and brothers-in-law, Mike Brykaliuk and Orville Germak.
Left to cherish fond memories are his children, Karen (Michael Van Kats), Janis Kennedy (Patrick Dwyer), Gregg (Beverley Squair), Keith (Tammy Hannibal) and grandchildren, Charlotte Melnyk and Helena Hannibal and Sean and Matthew Kennedy (their father Joe); sister Rose Brykaliuk and sister-in-law Gaylene Ziprick (Jack).
Peter was raised on the family farm near Angusville and graduated from Brandon University with degrees in Arts and Education. Peter's teaching career began in a one room country school called Seeburn followed by St. Mary's, Angus, and Lima schools in the Pelly Trail School Division. The majority of his 38 teaching years were in the Dauphin-Ochre School Division, now called the Mountain View School Division. He held many fond memories of the many students he taught.
In 1961, he married his wife Faith and together they raised their family in Dauphin, Manitoba. They celebrated their anniversary nearly every year by returning to Clear Lake where they first met and honeymooned.
Peter was a great lover of the outdoors. Many summers spent with family and friends at the cottage at Hill's Resort on Lake Manitoba were priceless. Peter always knew where to find the fish and he could fillet a pickerel with speed and precision, with a no bones guarantee (jackfish included).
He was a lifelong member of the Knights of Columbus. He was well respected in the community for he believed in treating others as he would expect to be treated. His family and friends would attest to that.
He took great pride in his children's musical and sports pursuits. Whether it was for music lessons in Brandon or out of town hockey tournaments, he would often be driving around with a station wagon full of kids. He was often on the phone arranging practices and hockey tournaments as the Team Manager for the travelling minor hockey team and he rarely missed a game.
Peter enjoyed five pin bowling and in league play, he could be counted on to bring up the team average. He curled in various curling leagues and was proud to finally qualify for a provincial event at the Masters in his later years of curling.
His later retirement years were spent in the comfort of the Parkway Retirement Community in Winnipeg. He took great pride in organizing the snooker league and helping beginners learn the basics of pool. He was so grateful for the many special friendships he made and for the warm and friendly treatment from all the staff.
Thank you to all who knew, helped and loved Peter. Special thanks to the amazing staff at the Grace Hospital for their kind and compassionate care during his final hospital stay.
Peter's children will gather later this summer to inter his ashes at the Dauphin Riverside Cemetery.