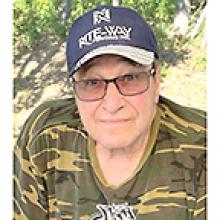 
It is with tremendous sadness that we announce the passing of Robert Andrew Jacobson, age 72.
He was a devoted husband to Delores Jacobson for 49 years and was blessed with two children, Cynthia (husband-David) and Tracy. Grandchildren further blessed his life when Liam (fondly called "guy") then Cassidy (fondly called "princess") were born. The son of, Anna and Ernest Jacobson, brother to Leslie Jacobson (wife-Carol) and Diane Kicenko (husband-David), Robert was a farmer-heart, mind and soul farming the family farm with his father, brother and two nephews. He loved driving a combine in the sun of Manitoba's early fall, tinkering with machinery, playing cribbage with coffee, hunting, history and visiting his large extended family.
Robert achieved many dreams in his life: travelling to Europe for his 25th wedding anniversary (memories of which he fondly shared), travelling to Alaska for his 65 birthday, and purchasing his own camper (which he was passionate about, repairing and tinkering it with zeal). Seeing his 50th wedding anniversary was his only unachieved dream when he lost his final battle with cancer.
We gratefully thank his doctor, Dr. John Donnelly as well as all the staff at Cancer Care for the smiles, hope and aid they gave. So too the staff of Interlake Eastern Palliative Care who helped to ease him at the end.
A celebration of his life will be planned before seeding and a private interment will follow for the family.