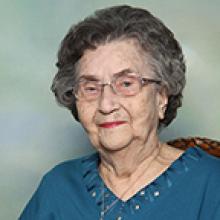 
Peacefully a day before her 95th birthday, Stella Evelyn Carson passed away at Golden Door Geriatric Centre in Winnipeg, Manitoba on the morning of Monday, February 28, 2022.
Born Stefana Wytrykusz on March 1, 1927, in Miekisz Stary, Galicia, Poland. After growing up in the Yorkton, SK area with her large Ukrainian family, she married her late husband Edward Nixon Carson on June 5, 1955, and made Winnipeg their home.
She will be profoundly missed by her loving family: daughters, Linda (Gerry) Kozakewich (Winnipeg), Colleen (Craig) Thomas (Red Deer, AB), sons, Ken (Lois) and Shawn (both of Winnipeg), and Christopher (Mary Baptiste) Carson (Ross River, YT) and sixteen grandchildren: Timothy (Amanda), Brennan, Robert (Stephanie), Kathleen and William Kozakewich; Cory, Kent (Vivian), and Kari Carson; Trevor, Molly (Anna), Duncan and Liam Thomas; Caitlyn (Phil) Arnould and Samantha (Scott Bergsma) Carson; Leah and Aiden Baptiste; and eight great-grandchildren. She will be also missed by her six surviving siblings, one sister-in-law, and many nephews and nieces.
Stella was a daughter, sister, friend, wife, mother, grandmother, great-grandmother, and among other things, a strong Ukrainian immigrant woman. She gave us roots, led with faith and love, and worked hard. She took care of the people she loved. As the oldest sibling, she had a tremendous positive influence on her younger brothers and sisters and their children, her nephews, and nieces. While raising her five children, she kept the books of Ed's plumbing business. On top of that, she was an active and influential member in the Catholic Women's' League and fought passionately for the Pro-Life cause. After her children started their own families, she kept busy running a successful tax preparation business and she looked forward to watching her grandchildren and great-grandchildren. She kept active as much as possible in her lifetime. Those who knew her are so blessed to have seen all the wonderful things she was and to have the countless lessons she taught us. We carry her love with us.


Funeral Mass will be held Tuesday, March 8, 2022 at 11:30 a.m. at St. Vital Catholic Church, 1629 Pembina Hwy., with Fr. Moise Adossou officiating. This service will also be live-stream and those that want to participate can go to www.stvitalparish.ca
In lieu of flowers, donations may be made in Stella's memory to the Canadian Red Cross Ukraine Humanitarian Crisis Appeal. You can also view this obituary on Korban funeral chapel website.