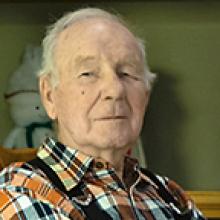 
Bill Betz passed away at the age of 86 years in hospital with his family by his side, actually and virtually.
He is survived by his wife Isabel (neé Barker), his daughter Michele (Thomas) Lepp, and his sons, Mark (Katy Gardner), Vaughn (Corinne Wolfe-Betz), Patrick (Karen), and Grant (Tracy). He also leaves his beloved grandchildren, Erin (fiancé Stephen Radford), Heather, and Christian (Lepp); Tierney, Teighyn, Brodie, Avery, and Tye (Betz); Victoria, Katherine, and Emily (Wolfe-Betz); and numerous nieces and nephews. He is predeceased by some dear friends: Glen Gurney, Moe Zastre, Mervin Sumner, and David Frye.
Bill was born in Runnymede, SK to parents, Frank and Magdalena (neé Wirl), the sixth of seven children, all by whom he is predeceased: Wilfred, Gene (Hopkin), Reginald ("Reg"), Grace (Murchison), Clarence, and Marianne (Ryan). His was a childhood and adolescence of hardscrabble family farm work alongside school and church. After a brief hiatus from his secondary studies, Bill returned to complete his high school diploma in Neepawa, MB, and was indebted to the Sumner family there for their generosity and support - the Betz family has enjoyed enduring relations with the Sumners ever since.
Upon completion of his certificate at Manitoba Teachers' College, Bill initially taught at schools in rural Manitoba before moving to Winnipeg to join staff at Linwood School in St. James, where he remained resident for the entirety of his working life. It was at Linwood that Bill and Isabel, also a teacher, met and courted; they married in 1961 at St. Paul the Apostle Catholic Church, Winnipeg, where they remained parishioners for the next 60 years, and where until recently Bill steadfastly participated in the running of the weekly bingo nights.
A devout and principled man, Bill's greatest happiness involved time spent in work and at play with his family. Two ventures undertaken in his late 30s and early 40s had transforming and lasting effects on them all. After some early family summers spent camping, Bill and Isabel bought a small cottage on Granite Lake, ON, in 1974. Bill and his close friend Davy Frye learned basic construction and electrical skills to build additions onto their two adjoining cottages; the summers (and some Christmases) their families have had at Granite Lake ever since have been joyous in ways difficult to overstate. In 1978 Bill purchased a half section of farmland near Beausejour, MB, and for the next 20 years grew crops there with the help of his (not always entirely keen) wife and children. Bill's enthusiasm for farming was abiding, and the family is thankful to George Murash for the initial sale of his land and ready counsel, and latterly for his taking over of its husbandry.
Bill graduated with a B.Ed. from the University of Manitoba in 1968. His 35 year career as an educator was spent almost entirely in St. James Assiniboia School Division No. 2, first as a teacher, then Vice-Principal and then Principal at several schools, including Woodhaven, Assiniboine, Stevenson-Britannia, Strathmillan, and Buchanan. Upon retirement Bill continued with lifelong sporting pursuits (curling, fishing, golf), and with characteristic vigour took up further work at a gas station and with a newspaper route, which he retained into his 70s. Other endeavours beckoned: a modest second residence in Donna, Texas, which he and Isabel bought in 1995 and made their own, spending a decade of wonderful winters snowbirding there; developing and honing his woodworking proficiency to make furniture and all sorts for his family; and the purchase of acreage and the building of a beautiful home in Headingley, MB, in 2006, where he and Isabel were blessed with 15 happy years living close to children, in-laws, and grandchildren.
Bill's was a life filled with devotion to God, duty to community, pleasure in industry, and love of family and friends. He will be remembered and missed by all those he knew and touched during his life.
Cremation has taken place. Prayer services will be held at St. Paul the Apostle Catholic Church on Monday, March 14, 2022, at 7:30 p.m. A Celebration of Life and Funeral Mass will be held also at St. Paul the Apostle Catholic Church on Friday, April 22, 2022, at 11:30 a.m.
A special thank you to all of the amazing MICU staff at the Health Sciences Centre, Winnipeg, for the care, compassion, and kindness they gave to Bill and his family in his final weeks. We are grateful for everything you have done.
In lieu of flowers, please consider honouring Bill's memory with a donation to Siloam Mission, Winnipeg, or the Alzheimer Society of Manitoba.