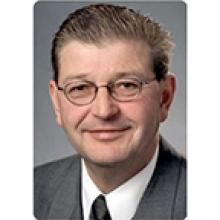 
After a life well lived, although far too short, Douglas Harry Deprez left us suddenly with his family by his side on Sunday, March 6, 2022. He will be warmly welcomed by those that went before him but tragically missed by those he leaves behind.
Doug was larger than life, not just in stature but in personality. Everyone that has stopped in over the last week, and those have been many, has had some great stories about his generosity, kindness, and sense of humour.
Doug was born on July 12, 1951, in Winnipeg to Maurice (Big D) and Germaine (Ma) Deprez. He was the second in what would be a line of five boys followed by two girls that they loved to terrorize and protect at the same time. The Deprez house was a busy place filled with love…always on the go with farming, hockey, baseball and general (fairly good natured) shenanigans. If the shenanigans got too out of hand, they could always repent at church on Sunday!! They all loved growing up in Stony Mountain and all remain there to this day!! Doug told Vicky recently that he was so proud that none had ever had a major falling out…family was everything.
On a trip to Hawaii in February of 1975 he met his future wife Vicky at Shipwreck Kelly's. As it turned out they only lived twenty miles apart back home and, after a whirlwind courtship, they were married on October 25th that same year.
Doug was a born salesman who loved to help his clients/friends whether it was selling trucks at Stern Trucks for 21 years or as a very well regarded and skilled Certified Financial Planner (CFP) with Investors Group for 28 years. Doug officially retired from Investors Group on September 30, 2021 but enjoyed the last 11 winters at their winter home in Florida.
Even more than his dedication to career Doug was dedicated to and defined by his family. The close bond he has with both of his children Ryan and Jenna will last forever. When the kids were younger, he would take the family on wonderful vacations to Hawaii, Mexico, Disney World and many road trips throughout Canada and the USA. Ryan and Jenna both looked up to their dad as their mentor. He was a fountain of information for his children.
His grandchildren loved their Papa, and they were the reason for his very existence since their birth!! He spent his free time with his grandchildren cutting grass, cleaning the yard and endless summer days by the pool. Over the last couple of winters, the kids opened their "business" called The Winter Club just for their Papa which included shovelling the driveway, hauling and stacking wood and a crisp $5.00 bill for each of them.
Doug was predeceased by his parents, Maurice and Germaine Deprez; his mother-in-law Nancy and father-in-law George Harrowen; sister-in-law Marsha Giles, brother-in-law Lyle Giles and brother-in-law Gerry McEachern. Doug is survived by his beloved wife of 47 years, Vicky; son Ryan, daughter-in-law Lisa; daughter Jenna (Jared). Grandchildren; Natasha, Trent, Jase, Linnea, Brayden and Mikenna. Brothers Rod (Sheryle); Don (Laurie); Laurie (Arlene); David (Debbie); sisters Leanne (Doug) Sinclair and Lindy McEachern. Sister-in-law Donna Harrowen; numerous nieces and nephews.


It is not if you win or lose but how you play the game.
Doug played it well.