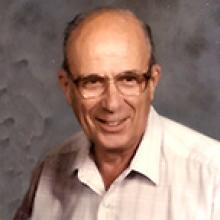 
Robert Rae passed away peacefully on March 2, 2022, at the Victoria Hospital in Winnipeg, with his daughter by his side.
Dad (or "Boppa" as he was called by his grandchildren and great-grandchildren, and "Bob" by everyone else), was 95 years old.
He was predeceased by his wife, Merry, in 2020 after 70 years of marriage. Together they raised three children, Ian (Lesley Brager) of Victoria, Carol (Clarke Wilkie) of Winnipeg and Gordon (Pearl) of Calgary. They also lovingly grandparented six grandchildren and 14 great-grandchildren. Robert also leaves behind his brother Ewing (Wilma) Rae of Midland, ON and sister Katherine Mary (Durant) of Ottawa.
Bob was born in Vancouver and graduated from UBC with a degree in Agriculture. While earning his Master's in agricultural engineering at the University of Saskatchewan, he met Meredith Hall, whose father, like Bob's was a United Church minister. Soon after their marriage in Saskatoon, they set off on a five-year mission teaching at the Agricultural Institute in Allahabad, India where their three children were born.
Upon returning to Canada in 1956, Bob took a position as an engineer with the Manitoba Department of Agriculture in Brandon. They settled in the Brandon area until 1998, with the exception of 16 months in Damascus, Syria working with the United Nations Food and Agriculture Organization, and two years in Tanzania with the Canadian International Development Agency.
Bob had long dreamed of living in the country close to nature. This dream was realized when, after their return from Tanzania, he purchased 80 acres in the Brandon Hills and set about designing and contracting their energy efficient passive solar heated home. He would spend hours planting trees and cutting paths through the woods. Many gatherings of family and friends were enjoyed here.
Bob retired in 1992 and a few years later moved to Qualicum Beach on Vancouver Island. Here, Granny and Boppa enjoyed 20 years of active living before returning to Winnipeg to complete their life journey.
Wherever Bob resided, he served the church and community in many ways. As active members of the United Church of Canada, he and Merry attended Knox United Churches in Saskatoon, Brandon and Parksville, singing in the choirs, serving on various committees in local congregations, Presbytery and Conference. Bob was a commissioner to General Council four times. He was a member of the Rotary Club, a volunteer with the "E" Division, Lifeline, and Search and Rescue, having earned a pilot's licence. His passion was the Canadian Food Grains Bank with whom he toured and spoke at many fundraising events.
Together, Bob and Merry developed cherished friendships and positively touched so many wherever they lived and travelled.
The family wish to thank the staff at Rosewood Supportive Housing in Winnipeg for their support these last few years and the 5th floor staff at the Victoria Hospital for their care during his last week.
A joint Celebration of Life service for Bob and Merry will be held in Winnipeg at a later date when pandemic restrictions allow.
If people wish, donations in Bob's memory may be made to The Mission and Service Fund of The United Church of Canada or to the Canadian Foodgrains Bank.
Condolences and memories may be shared by visiting Bob's memorial page at seasonsfunerals.ca