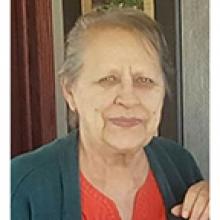 
With great sadness, we announce the peaceful passing of Margaret Rose Dyck (nee Kube) on Saturday, March 12, 2022.
Margaret was born on February 4, 1942 to Otto and Pearl Kube and raised in Thornhill Morden, MB. She was raised along side her siblings, Larry Kube, Laura Zacharias, Ruth Loutchan, and Garry Kube.
Margaret was married to Jake Dyck on April 4, 1959. Together they welcomed seven children, Natalie (Bill) Granger, Corrine Dyck - (born December 14, 1960 and passed February 16, 1961), Norine (Mark) Allan, Colin (Joanna) Dyck, Kevin (Barb) Dyck, Angela Dyck (Rene St. Pierre), and Lawrence (Nikki) Dyck. Margaret was a grandmother of 18 grandchildren and a great-grandmother of 25 great-grandchildren.
Margaret was predeceased by her young daughter Corrine whom passed at two months old; her parents, Otto and Pearl; nephews, Craig, Larry Jr.; her husband Jake and her sister Laura.
Funeral service will be on Saturday, March 19, 2022 at 2:00 p.m. in the Zion Evangelical Lutheran church Morden, MB, viewing will be one hour prior with Reverend Alex Klagen officiating. Interment to follow in the sunny side Cemetery.
In lieu of flowers, if so desired donations may be made to CancerCare Manitoba.