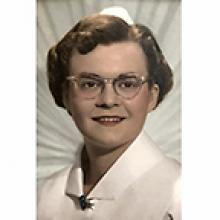 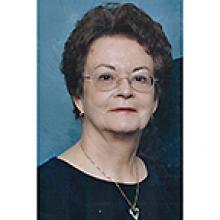 
Myrna Ellen Rourke passed peacefully with her family by her side on March 14, 2022.
Myrna was born in Winnipeg on February 5, 1933, eldest daughter of Walter and Alice Sparks. The family lived in Transcona and then Portage la Prairie, where Myrna attended school. In 1944 the family returned to Minto, MB, where Walter and Alice had lived previously. In 1950, Myrna completed her high school at Brandon University, then embarked on her lifelong journey of learning. She completed her RN at Winnipeg General Hospital (and while in Winnipeg, met Donald Neil Rourke). Myrna and Donald were married in 1953 in Portage la Prairie and resided in Winnipeg. David was born in 1956, Douglas was born in 1957 but sadly only lived a week and Donna was born in 1960.
Myrna's drive for knowledge led her on a long career of education and a long career in nursing and administration. She completed a BN., M.Ed., M.N. and Ph.D., all the while working and raising her family with Don. She worked in the ER, the OR, in Children's hospital, lectured at the U of M, worked in Public Health and was Director of Nursing at Women's Hospital at HSC. Her Ph.D. was to develop screening criteria to identify families who would benefit from extra health care and support resources in their life as new parents. As a result of her thesis, this screening tool is used throughout Manitoba in hospitals and birthing centers for all new parents.
Myrna and Don lived in St. Vital, Sanford, Winnipeg and Stony Mountain, making friends wherever they were. Myrna and Don travelled extensively through the years, to England, Scotland, Ireland, throughout Europe, Portugal, Australia, New Zealand, Fiji, Cook Islands, the Caribbean, Hawaii and spent many winters in Yuma, AZ. She also travelled with daughter Donna and granddaughter Carol to Europe and Great Britain, as well as a trip to Africa with Donna, Lyle, Carol and a good friend Shirley. Don sadly passed in 2009 after 56 years of marriage. Myrna continued to travel with Friendship Force to India, Japan and to Brazil and Scotland with Shirley. She met her partner Terry Hercus, whom she spent ten years with, they also travelled, visiting Costa Rica and Peru. Myrna and Terry have lived in Winnipeg and Sydney, BC, permanently returning to Manitoba two years ago. Myrna's health has declined in the last couple years, but more so in the last few months. In February 2022, she moved to Donna and Lyle's where they have cared for her.
Myrna is survived by son David (Diane) and daughter Donna (Lyle Evenson); as well as six grandchildren, their spouses and 14 great-grandchildren. She is also survived by her partner Terry Hercus; sister Allayne; sisters-in-law, Isabel Rourke, Lil Rourke, brother-in-law Brian Littlewood and many nieces and nephews.
Myrna was predeceased by her husband Donald; infant son Douglas; her parents, Walter and Alice Sparks; infant brother William Morley; in-laws, Jack and Minnie Rourke.
In lieu of flowers, the family requests charitable donations to be made to the Hercus Rourke bursary at the University of Manitoba. Gifts may be made online at give.umanitoba.ca or sent to University of Manitoba, Alumni and Donor Relations, 200-137 Innovation Drive, University of Manitoba, Winnipeg, MB, R3T 6B6.
Mom's life was one of learning, dedicated work in health care, her family, music (piano, sax and clarinet), dancing, reading, dinner parties, friends, travel, knitting, painting and ceramics, enjoying life wherever she was. She healed, she nurtured, she studied, she loved and laughed. She's with Dad now, may they enjoy many dances together. Till we meet again.