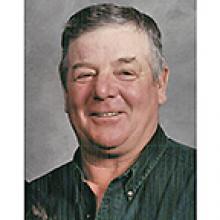 
It is with extreme sadness that we announce the passing of James Blahey at Health Science Centre on March 10, 2022.
Jim was the son of Steven and Marie Blahey. He lived in the Sky Lake area all his 75 years.
Jim is predeceased by his parents, Steven and Marie Blahey; his in-laws, Victor and Norma Ching; numerous aunts and uncles and four cousins.
Jim is survived by the love of his life, his wife Gail and his son Jeffrey; brothers, David (Ruth), Carl (Diane); sister Louise (Bernie); brother-in-law Lloyd Ching (Susan); nieces and nephews, Michael, Bradley, Kelly, Jennifer, Stephanie, Tiffany and Melanie, Kristen, Garnet (Ching). Jim had numerous great-nieces and nephews, 13 in total. He always had a little grin and loved to tease, he took great comfort in all his family.
Jim was a strong willed man, he loved life. He was a great man, he loved to socialize with friends, loved going to town on Fridays and shopping at Co-op. His life was revolved around work. He had a very strong work ethic. He was especially proud of his son Jeff when they were fixing machinery. Jim always told him if it's broke you fix it, if it's not broke you break it and then you fix it again. Jeffrey was raised by Dad's motto, no such thing as can't and won't.
Jim at an early age fulfilled his dream of becoming a heavy equipment operator, which he did for many years with many different contractors all over Manitoba. He got very happy to see a D9 Cat. In 1971, he decided he wanted to start cattle farming and bought his first Hereford cows. Jim had great love for his Belgium team of horses. He always fed with them in the earlier years. He always said they didn't have to be plugged in and they were cheap on gas.
This finalized Jim's life and now we are left with such wonderful memories. Jim's last words in his 75 years were to his nurse, he took her by the hand and said if she could hold his pocket knife.
The family wishes to thank the Gimli Hospital, the Paramedics, the staff in Neurology Dept. at HSC for all their care and compassion.
Cremation has taken place, there will be a celebration of Jim's life at a later date.