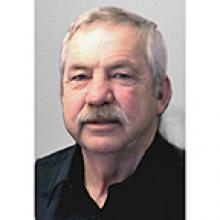 
Peacefully, on Sunday, March 13, 2022, Alphonse passed away after a short battle with cancer, at the age of 71.
He leaves to mourn his wife of 47 years, Claire (nee Combot) and their sons, Jean-Claude and Mario. He also leaves to mourn his brothers, Paul (Joyce), René (Leona), Horace (Terry), Roland (Rita); sisters-in-law, Blanche and Ann Buors and brother-in-law Johnny Chartrand. He also leaves his mother-in-law Marcelle Combot; sister-in-law Sue (Lynn Bruce); brother-in-law Joel Combot (Monique); and many nieces, nephews and friends.
He was predeceased by his parents, Louis and Elizabeth (nee Bruce); sister Denise (Chartrand); brothers, Marcel, Jerry and Henry; and father-in-law Henri Combot.
Funeral Mass will be celebrated at St. Timothy Roman Catholic Church, 135 John Forsyth Road, St. Vital, MB on Friday, March 25, 2022 at 2:00 p.m. Coffee and cake will follow after the service in the church hall. Private interment will take place at a later date. For those that are unable to attend, the service will be livestreamed at www.st-timothy.ca
Flowers are gratefully declined, if desired, donations may be made to CancerCare Manitoba in memory of Alphonse.