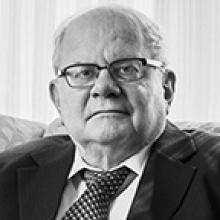 
Character, generosity, and a sharp sense of humour are some of the traits that distinguished Charles Phelan up until his death on March 15, 2022 at the age of 80.
"Chuckles" will forever be remembered for his down-to-earth personality, his love of family and friends, and fondness for good political discourse over a glass of Scotch.
Charles married the love of his life Sylvia Phelan (Shewchuk) in 1972, and the two recently celebrated their 50th wedding anniversary together. They made countless memories traveling the world and spending time entertaining family and friends beside the backyard pool in St. Vital. Charles is also survived by sons Michael and Timothy and daughter Colleen, along with daughter-in-law Ginger Arnold and grandchildren Lily and Tony Phelan.
Born in Winnipeg to parents, Charles and Margaret (Jerome) Phelan, Charles grew up in River Heights with his sisters, Judy, Cecily and Anne (deceased). Following his time at St. Paul's High School, he attended the University of Manitoba, earning his Bachelor of Arts in 1963 and Bachelor of Laws in 1967. He carved out a storied legal career as a partner at Monk Goodwin LLP, where he earned the Queens Council (QC) designation for exceptional contributions to the legal profession in Manitoba. Among his numerous accomplishments, he was recognized in 1972 with the Queen Elizabeth II Silver Jubilee medal in recognition of his outstanding work in the community.
Charismatic to the bone, Charles had a special way of making people laugh and feel welcome. There wasn't a proper party unless he was there. Occasionally he was known to play some tunes on the piano or belt out an old Irish folk song. His words of wisdom, joyful laugh, and kind-hearted nature will remain forever in the hearts of those who knew him.
A funeral service will be held at Holy Family Ukrainian Catholic Church, 1001 Grant Avenue on Monday, March 21 at 11:00 a.m. to celebrate the life of Charles Phelan. For those unable to attend, a virtual ceremony can be accessed at https://youtu.be/LaMS0nRcccA.
In lieu of flowers, donations to the Ukrainian government fund for the defence of Ukraine are appreciated (https://war.ukraine.ua/donate).