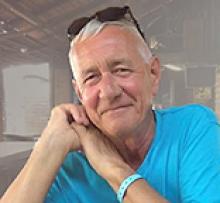 A few days after reaching his 70th birthday, James left this world to enter his heavenly home. With family at his side, he surrendered his body and soul to our loving God.
James will be remembered with love, always, by his wife of 47 years, Ruth (nee Rempel); his children, Brigitte Ketler of Edmonton, AB and Andrea (Jamie) Fragomeni of Winnipeg, MB; as well as his two beloved grandchildren, Michael and Elena Fragomeni. James' sisters, Joanell (Don) Smith, Marjorie Ketler, and Patti Ketler will miss him dearly; as will his in-laws, Henry and Evelyn Harder, Johanna Rempel, Lorraine Pachal, Randy and Carol Rempel, Don Rempel and Tara Nault. Many nieces, nephews and friends will also mourn his loss, but we will all rejoice in the setting free of his earthly body to a spiritual body, free of pain at last. Thanks be to God.
James was predeceased by his parents Henry and Doris Ketler, his in-laws Ed and Helene Rempel, and two brothers-in-law, Gorden Pachal and Melvin Rempel.
James was born in Steinbach, MB on March 11, 1952. He married Ruth Rempel on August 23, 1974. Two beautiful daughters, Brigitte and Andrea, were born in the next few years.
As a hardworking and masterful electrician, James became a friend and mentor to many young electrical apprentices over the years. Many of them considered James as being a central force, not only in their careers, but also in their lives. James was a good influence on many with his dedication, intelligence, and unwavering belief in providing excellent workmanship.
Travelling and discovering different provinces and territories in which to live for a year or two, then moving on to the next adventure, led to making many new friends across Canada and Mexico. Camping in the great outdoors was a particular favourite activity. From Ontario to Vancouver Island, and through the U.S. to Mexico, all journeys were taken on with great exuberance. Pulling a fifth wheel trailer throughout Mexico, especially, provided enough interesting stories to entertain our family and friends forever.
Woodworking and building kept James busy and happy his entire life. He built eight homes and cabins for the sheer love of building, the smell of the wood, and the joy of designing and creating homes for his family. His creativity always flowed and if you asked, he would happily build it. Doll furniture, toy blocks, balance beam, playhouse, flower planters, porch swing, cedar strip canoe, hope chests, ice shack, hot tub, bunk beds, 100 giant Jenga blocks, and birdhouse – no project was too big or too small.
BBQ-ing, fishing, and spending time with his sons-in-law, Barry and Jamie, also brought him great joy over the years. The last year and a half as the Superintendent of Ashdown Warehouse in Winnipeg brought James great satisfaction in overseeing projects, maintenance and interacting with management and condo owners, all who became good friends.
James' trust in God never wavered. His peace of mind was immensely improved after he and his family received Holy Communion at home in the days before his passing.
On behalf of James and our family, we wish to thank everyone who helped us through this trying time – the doctors, nurses, and aides in Internal Medicine at St. Boniface Hospital, the Palliative Care Program and Home Care Team, the caring management and residents of Ashdown Warehouse, our spiritual advisors, as well as our families and friends. We received more food, prayers and support than we could have ever imagined. We thank you all.
Donations in memory of James can be made to St. Paul Lutheran Church Memorial Fund in Steinbach (our home church for more than 30 years) or to CancerCare Manitoba.
A small family memorial service was held at Friends Funeral Service in Winnipeg. A larger gathering of friends and family will take place at a later date.
Rest in Peace, James, Dad, Grandpa. We loved you dearly and were lucky to have you in our lives all these years. We will see you again in Heaven. Make a donation to