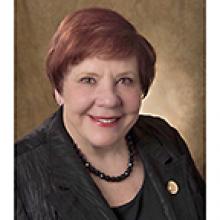 
Rayleen De Luca passed away on Tuesday, March 22, 2022, after a courageous battle with Cancer. I hate cancer... She is preceded in death by her mother Elsie, father Leno and brother Leonard.
Rayleen De Luca was born in Shawinigan, Quebec in 1942 but spent all but a year in Winnipeg, for which she loved and cared deeply. Her greatest love was for her family, first and foremost Vincent, her devoted husband of 58 years. Their love, friendship and relationship are truly a role model for all married couples! Secondly, was her love of and for her children, Troy (Susan) and Trevor, her grandchildren, Cassidy, Tyler and Cole AND great-grandchildren, Hazel (Tyler), Violet (Cassidy) and Willow (Cole). When asked about what she believed/hoped her legacy would be, without hesitation she said her family.
Anyone who knew Rayleen knew she was all about the children, whether hers or not! She devoted her entire adult life to the care of children starting with her own family and then professionally through academia resulting in her achieving a doctorate in the field of Psychology focusing on children and their mental health well-being. Her passion for helping children led her to become the most respected and sought-after child psychologist in Manitoba and beyond! Furthermore, committed to the Scientist Practitioner model of clinical psychology she became recognized as one of Canada's foremost researchers for her pioneering work in the area of child sexual abuse. Rayleen was invited to make presentations nationally and internationally, including at the Universidade Catolica, Andres Bellow, Caracas Venezuela, the Universidade Catolica Dom Bosco, Campo Grande, Brasil and Universidade Aberta Do Brasil, Barretos, Sao Paolo, Brasil. Her publications have been translated into many languages and her research in the area of child abuse and family violence has been coined "groundbreaking".
As a professor at the University of Manitoba in the Department of Psychology, Rayleen was the first woman to hold the position of Director of Clinical Training. Her colleagues and peers of the Manitoba Psychological Society recognized her distinguished contribution to the profession of psychology when they awarded her the prestigious Clifford Robson Award.
Rayleen was active in countless community organizations with a focus on solutions to violence and abuse. Nominated as a Canadian representative to the United Nations - Status of Women Committee, she was not afraid to speak out for injustices and enabled others by virtue of her involvement with them. Rayleen was a tireless advocate and inspiration for/to women.
Rayleen's extensive volunteerism has enhanced the lives of Manitobans in countless ways. For example, she served as President of the Folk Arts council, which oversees Folklorama, the largest and longest running multi-cultural festival in the world. Additionally, she served as Vice-Chair of the Board of Governors of St. Paul's College and was appointed by the Canadian Conference of Bishops and served on a national ad hoc committee on the Protection of Minors and Vulnerable People. Enriching the lives of others, Rayleen freely gave her time to share her area of expertise and served as an inspiration.
Rayleen received many awards for her academic, professional leadership and commitment. The following is a subset of those awards:
Manitoba Trailblazer Recipient (2021)
Sons of Italy Garibaldi Lodge (2018), Canadian Italian Business Professionals Association, Professional of the Year
Government of Canada (2017) Order of Canada
Mood Disorders Association of Manitoba (2016) The Helping Hands of Health Award
Nellie McClung Award Recipient (2016) The Nellie McClung Award
Government of Canada (2013) The Queen Elizabeth II Diamond Jubilee Medal
University of Manitoba (2013) Faculty Special Achievement Award
Province of Manitoba (2011) The Order of Manitoba
University of Manitoba (2012, 2010, 2005-2008) Arts Celebrating Arts Award
Manitoba Psychological Society (2010) The Clifford Robson Award
University of Manitoba (2008) Outreach Award
YMCA-YWCA (2008) Woman of Distinction Award in Health
Sons of Italy (2007) Lupa di Roma Lodge Donna Dell'Anno Award
University of Winnipeg Alumni Association (2006) Distinguished Alumni Award
Honouree of Alpha House (1996)
City of Winnipeg Appreciation Award (1995)
Eccellenza Award (1989)
Shira Uri Women's University, Tokyo, Japan (1992) Certificate of Honours
Doctoral Fellowship (1981-1985)
Special M.A. Scholarship (1979-1980)
University of Winnipeg Gold Medal (1979)
Dr. C.J. Robson Scholarship in Psychology University of Winnipeg (1978)
Board of Regents, General Proficiency Scholarship, University of Winnipeg (1976-1978)
We would like to extend our deepest gratitude specifically to the Real Care in-home staff along with the nursing staff at St. Boniface Hospital (ward 7A).
Funeral will take place Wednesday, 11:00 a.m. at Holy Rosary Catholic Church with condolences starting at 10:00 a.m.