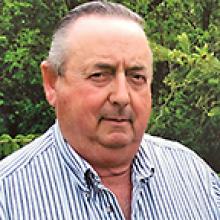 
Brian passed away peacefully on March 24 at 80 years of age.
He is survived by his loving wife of 57 years, Kathy; children, Scott (Lisa) and Robin (Andy); grandchildren, Grace, Devon, Kaitlyn and Abigail; his sister Marilyn and sister-in-law Fran. Brian was predeceased by his parents, Herb and Nina.
Brian was born on Martin Avenue and raised in East Kildonan where he was a founding member of the East Kildonan Guardians car club. He and Kathy were married in 1964 and moved to Linden Avenue while he worked as a mechanic at Kendall's garage.
In 1971, they made the move to Springfield where he opened and operated Oakbank Motors garage. Brian also was a member and managed the Oakbank Gun Club for many years. Early in their time in Springfield, Brian joined the Springfield Fire Department. He was a proud firefighter who dedicated 37 years to the residents of Springfield and earned the Governor General's Exemplary Service award.
In 1976 the city kids took a right turn and starting farming, having bought their farm property on Plympton Road where they lived and farmed for almost 40 years. In addition to many years of farming, Brian later operated a backhoe business serving many neighbours and residents of the municipality. In the mid 1980s Brian represented his ward as an RM of Springfield councillor. Later, he served as an original member of the Cooks Creek Conservation District and helped initiate the well sealing water conservation program. He also volunteered many years with the local Citizens on Patrol Program. Brian and Kathy moved from the farm to Dugald in 2015.
Brian was someone every neighbour could turn to and never said no to helping all. If you needed something figured out, fixed or just a helping hand, he was your guy. In addition to being a dedicated husband and father he was an immensely proud grandfather who took great pride in the growth and accomplishments of his children and grandchildren.
The family would like to thank the many caring people who helped Brian through his ALS over the last couple of years including ALS Manitoba, Deer Lodge ALS Clinic, IERHA homecare and nurses and Palliative Care Manitoba.
The family would like to invite friends and family to a drop-in/come and go Celebration of Life from 2:00 p.m. to 4:00 p.m., Wednesday, April 6 at the Oakbank United Church Hall, 582 Balsam Crescent in Oakbank.