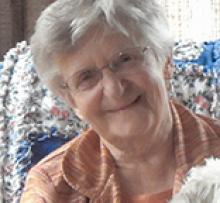 Vlasta Enns, aged 96, of Middlebro, Manitoba passed away peacefully on Wednesday, March 23, 2022 at Health Sciences Centre, Winnipeg Manitoba.
Vlasta was born to Joseph and Mary Benes in Zadar, Czech Republic on December 5, 1925 and immigrated to Canada with her family in 1937, originally living with her parents and family in the Steinbach region before settling in the Middlebro area where she raised her own family of seven children.
She is survived by her daughters, Vlasta (Neil), Jackie (Terry), Donna (Richard), Darlene (Denis), and Cynthia, her son Clifford, and her daughter Janice (Richard) and numerous grandchildren and great-grandchildren and nieces and nephews.
Vlasta was predeceased by her husband Jacob, son-in-law Tom and daughter-in-law Lori; her brother Otto, and sisters Milada and Anne.
It was Vlastas' wishes to be interred at Middlebro Cemetery in a private family service which will be held on Mother's Day.
Special thanks to the health care professionals at the Health Sciences Centre for the excellent care which made her final few days comfortable.