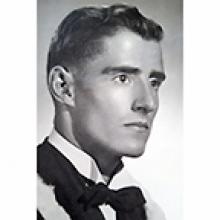 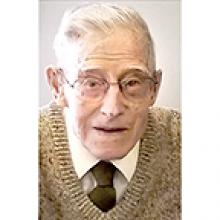 
On March 17, 2022, at the Personal Care Home in MacGregor, Manitoba, Wilfred Arthur Finch passed away peacefully in his sleep at the age of 104.
Born in Melita, Manitoba on November 23, 1917, Wilf spent his early years in Elkhorn before the family moved to Birtle, where his father served as minister at St. George's Anglican Church. Wilf lost his mother to cancer when he was just 12 and graduated from Birtle Public School at age 16.
During the Great Depression, Wilf and his twin brother Ed found work caddying at the Wasagaming Golf Course in Clear Lake, Manitoba. In 1939, Wilf later took a job in northern Manitoba with the Hudson's Bay Company, during which he received instruction in wireless communications.
When the Second World War began, Wilf answered the Navy's call for wireless operators and was assigned to a base in Victoria, British Columbia, where he monitored Japanese naval radio traffic. Later, he transferred to a submarine monitoring station in Halifax and served on the HMCS Runnymede, a corvette escorting merchant ship convoys across the Atlantic. During the final stages of the war, he taught wireless communications to groups of WRENS.
When the war ended, Wilf attended the University of Manitoba, earning Arts and Law degrees. He then joined the civil service and accepted a post at the Land Titles office in Winnipeg.
In Winnipeg, he attended St. Margaret's Anglican Church, where he met his future wife Dorothy. Married in 1961, the pair moved to Dauphin where Wilf served as District Registrar of the local Land Titles office. Their daughter Elspeth was born in 1962, followed by sons, John and George in 1964 and 1966, respectively.
Wilf served as treasurer for St. Paul's Anglican Church in Dauphin, while Dorothy served as organist.
Throughout their lives, Wilf and Dorothy remained active and vital members of the local church community, their lifelong faith and service to God evident in all they did.
Following Wilf's retirement from the Land Titles office, he and Dorothy moved to MacGregor to be closer to their grandchildren. In 2011, Dorothy passed away, but Wilf went on to celebrate his 100th birthday alongside Ed in 2017. A series of falls necessitated his move to the Personal Care Home in 2021, but he remained in good spirits until the end.
Wilf was predeceased by his wife Dorothy (née Whidden); parents, William John and Marie Louise Finch (née Bailey); sister Nellie (Lockie); brothers, Ed (Lee), George and Howard; and nephew Peter (Sandy). He is survived by his children, Elspeth (Randy), John (Debra) and George; grandchildren, Erin (David), Lyndon, Aidan and Jordan; and great-grandchildren, Isla and Nora; as well as by his sister's children, Bruce (Rosemarie), Geoff (Lynn), Deborah, Jennifer (Don) and Abigail (Karl), and by several great nieces and nephews.
In lieu of flowers, we invite friends to donate to charities of their choice.
Service and interment to take place at a later date.