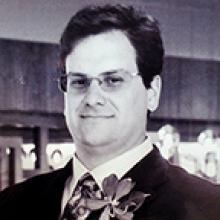 
On Friday, March 4, 2022, with tremendous sorrow, we began mourning the sudden passing of our beloved son, nephew, cousin, and friend Andrei Parkasewych.
Andrei was born in Winnipeg with a resilient nature and a fine head of curls. He was part of a loving family that instilled in him a deep sense of loyalty which he carried throughout his life.
In his youth, Andrei was a member of Plast Ukrainian Youth Organization, served as an altar boy and completed Ukrainian School at the parish of Sts. Volodymyr & Olha Ukrainian Catholic Cathedral. He later graduated from Miles Macdonell Collegiate then followed in his father's footsteps to become an avid reader and to pursue mechanics. Andrei worked for many years at Fleet Brake, enjoying the challenge of solving tough problems. His determined nature was reflected in his hobbies, including Tough Mudder runs and floor hockey, which led him to travel to the US and Japan for competitions. Behind Andrei's sometimes gruff demeanour was a kind, thoughtful person who never rushed a good conversation or a great book.
Left to mourn are his heartbroken Mama, aunt and godmother Christina Bahry (Len) and cousins, Evan (Cynthia) and Alexis (Angus), cousins, Natalka (Greg) and Motria (Stephane), extended family in Ukraine and the US, as well as a close circle of friends. Andrei was predeceased by his father George, godfather George Holowka, Uncle Modest Cmoc, Baba Myroslava and Dido Ivan Parkasewych as well as Dido Roman and Baba Olha Senchuk, with whom he had a very special bond.
Andrei believed passionately in Ukraine's independence, and to best honour his memory please donate to a charity that supports humanitarian efforts in Ukraine.
A funeral will be held on April 6 at 11:00 a.m. at Sts. Volodymyr & Olha Ukrainian Catholic Cathedral. Private interment to follow at All Saints Cemetery.