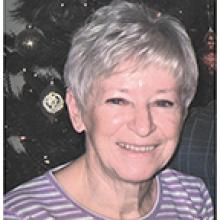 
It is with heavy hearts that we announce the unexpected and sudden passing of Carole Anne Lavich on March 19, 2022, at St. Boniface Hospital in Winnipeg, at the age of 75 years.
Carole was predeceased by her father Henri Verplaetse, mother Helen Verplaetse (Turcan), brothers, Sonny Verplaetse, Ken Verplaetse and sisters, Agnes Rear and Shirley Haywood.
Carole will be deeply missed by her husband David Lavich, daughter Dana Kulchycki and her husband Rick, granddaughter Olivia, her brothers, Barrie Verplaetse (Eleanore), Donald Verplaetse (Mari-Anne), Phil Verplaetse, sisters, Lillian Sedo, Yvonne Lindsay, Janet Deserranno (George), Diane Barnabe (Ed), Margaret Lavich (Leon), her many brother and sisters-in-law, nieces and nephews, relatives and friends.
Carole was born at St. Boniface Hospital on November 25, 1946 and grew up with her family in Winnipeg, MB in a part of the city known as Belgium town. Carole and David were married on June 23, 1973 in Winnipeg, MB. Shortly after they were married, Carole joined her husband in Comox, BC who was stationed there as part of the Canadian Armed Forces where he served in the Air Force. In May of 1974, military life really began for them when David was stationed to Baden-Soellingen, Germany and away from their families and home of Winnipeg. While stationed in Germany, Carole and David welcomed the birth of their daughter Dana, travelled to many countries in Europe, had family come and visit, had an active social life and made many lifelong friends. Carole, David and Dana returned back to Canada in May of 1980. Their military life between 1980 and 1993 brought them to Nova Scotia, Quebec, BC and back to Germany. After 19 years of living away from home, they were very happy to be returning back to Winnipeg, their hometown and is where they called home to present day. Carole's life in Winnipeg was dedicated to her family, mother, brothers and sisters. Carole loved her flowers, gardening, baking and bingo with her siblings. Carole also spent much of her time at the Belgium club in Winnipeg either Belgium bowling or volunteering there as part of the Belgium Womans Group. Carole's most recent pride and joy was her granddaughter Olivia, whom she shared a special bond and was always on the lookout of something she could buy for her while enjoying shopping.
Funeral service will be held on Tuesday, April 12, 2022, 2:00 p.m. at Glen Lawn Funeral Home & Cemetery, 455 Lagimodiere Blvd., Winnipeg, MB R2J 4J4.
If friends so desire, in lieu of flowers, donations may be made to the charity of their choice in her memory.


Family and friends may sign a
book of condolence at www.glenlawn.ca
Glen Lawn Funeral Home
204-982-7550