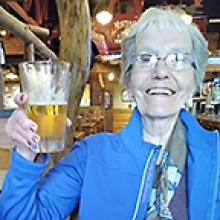 
It is with extreme sadness that we announce the passing of the best Maman ever, Cyprienne Dolorès Pelletier, age 83, at the Bethesda Regional Health Centre in Steinbach, Manitoba on April 1, 2022.
Cyprienne (Maman) will be lovingly remembered by her two sons, Ron and Dan; her two sisters, Beatrice Belliveau and Edna Carrière; and her nieces and nephews.
Cyprienne was predeceased by her parents, Harold Carrière and Marie-Louise Carrière; her son Roger Pelletier; her husband Toussaint Pelletier; her brother Raoul Carrière; and her brother-in-law Albert Belliveau.
Cyprienne was born on February 14, 1939. She was raised in St. Adolphe and went to school at the convent of the Sisters of the Cross in St. Adolphe. After her schooling, she started work as a kitchen helper at the St. Boniface Hospital and then at the Ninette Sanatorium. She then worked in the bookbinding workshop for Canadian Publishers in Winnipeg.
She married Toussaint Pelletier and had three sons, Ronald, Daniel and Roger. After Roger passed away, and Ron and Dan were both in school, she went to work at the St. Adolphe Personal Care Home as the cook for 16 years. She retired from that position.
Cremation has taken place. There will be no funeral service, and interment will take place in the St. Adolphe Roman Catholic Parish Cemetery at a later date.
The family wishes to thank the staff at the Bethesda Regional Health Centre for caring for our mother during her last days. We would also like to thank LeClaire Brothers for their services during this difficult time.