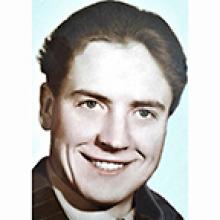 
Quietly during the night of April 8, 2022, Henry Anders went to be with his Lord.
Henry was born on August 22, 1928 in Karczemka, Poland to Gustav and Ida Anders and was one of six children. Following the end of the Second World War, he migrated to Hillerse, Kreis Northeim in Germany. Here he accepted Jesus as his personal Saviour and on Easter 1948, was baptized by Pastor Kersten in Kassel.
In 1950, Henry, his sister Lydia and his parents immigrated to Canada, setting up a home in Morris, Manitoba. It was in Morris that Henry got to know the love of his life, Bertha Hoff, whom he married on August 2, 1952. They moved from Morris to Winnipeg in 1971. God blessed their marriage with three children, Richard, Karl and Otto; three daughters-in-law; seven grandchildren and five great- grandchildren.
Henry lost his beloved Bertha to cancer on October 4, 1991. She was deeply missed by Henry and her family and their lives would never be quite the same without her.
Henry is the last of his immediate family to pass away, after the death of his parents; brothers, Richard and Otto and sisters, Helen, Emmi and Lydia. Henry deeply grieved the untimely death of his oldest son Richard in 2008. Henry is survived by his two sons, Karl and Otto and the families of his three sons.
Henry loved his Saviour Jesus until he died and believed that he would be joining his wife Bertha, son Richard and the rest of his family, who had passed on before him.


For information about Henry's
Celebration of Life memorial, please go to www.friendsfs.ca