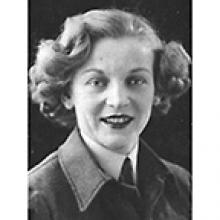 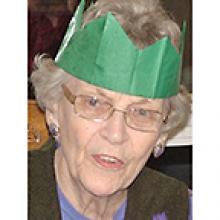 
Pamela Oakley, resident of Actionmarguerite Care Home St. Boniface, passed away after a long illness on Wednesday evening, April 7, 2022.
Pamela Oakley (Tyler) was born on August 31, 1924 in London, England. She was one of five children. In her early years the family lived in difficult circumstances but as time went on things became more stable and moderately prosperous. At an early age she showed an ability with dancing, singing, and acting. These became a source of pride for her throughout her life and always made her the life of any social gathering. When the War broke out Pam joined the WAAF and worked in Air Defence in the Balloon Barrage. This unit put up large Balloons over London which kept the German bombers at a high altitude and could also knock some of the bombers down if they came too low. She was then transferred to an entertainment unit known as "the Gang Show". She was an actress, singer, and performer. This was probably the high point of her life.
She met her husband, Ernie, a Canadian soldier, during the war and married him in 1945. Pam liked to tell everyone she was a War Bride and came to Canada on the Queen Mary after knowing Ernie only three days. They moved to Winnipeg and built their own house in 1946 for $6,000.00 dollars. They raised two boys, Bill and Roy. Pam was a good mother. The boys have fond memories of those early years. The teenage years were more difficult. Pam could be kind and generous. She could also be very sharp tongued and domineering. She did not like to see the boys growing up. They did grow up and got married. Roy married Ginger and Bill married Linda. They had three grandchildren for Pam and Ernie: Amanda, Matthew, and Deborah. The grandchildren loved to be at grandma and grandpa's house. Ernie and Pam willingly babysat and cared for the kids. Family gatherings were always a joy. We had memorable Christmas meals together.
In the mid-1990s it became apparent that Dad had developed Alzheimer's. Pam cared for Ernie until he had to go into Tache Nursing Home where he was well cared for. Pam faithfully visited him several times a week and did what she could to help with his care. Ernie died in 2005 and Pam moved into an apartment. As the years went by her grandchildren grew up and got married. Amanda married Rob and went to live in the United States. Matthew married Giselle and they had a daughter, Abigail. Deborah married Joel and they had two children, Savannah and Lennon. Pam was always happy to see the adults and their children.
Time moved on and Pam's health deteriorated. The boys and their families helped her out until she became enfeebled and had to move to Actionmarguerite in St. Boniface in 2015. There she received excellent care. The family wishes to thank the staff of 3 ABC for their faithful care all these years. This was all the more impressive when we remember that the last two years were the grisly years of COVID 19.
We bid farewell to Pam thanking her for her loving presence among us and wishing her well on her journey to God.


Cremation has taken place. Condolences may be left on her tribute wall at ejcoutu.ca
In lieu of flowers, a contribution may be made to Actionmarguerite, 185 Rue Despins Ave., Winnipeg, MB R2H 2B3 or a charity of your choice.