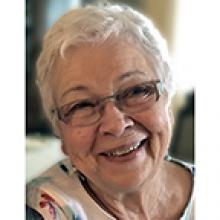 
It is with great sadness we announce the passing of Clara Kreis (nee Drigola). She passed peacefully at the St. Boniface Palliative Care Unit on the morning of April 11, 2022.
She leaves behind a loving husband Theodor of 63 years; sons, Harold (Sylvie), Robert (Lynda) and Richard; grandchildren, Victoria (Yuri Ziffzer) and Christopher (Alessia); great-grandchildren, Sophia, Leo, Noah and Maila and Harley, her favourite cat who she babysat often.
She is predeceased by her parents, Salomon Bart and Alma and her brother Rudy Abt.
Clara was born in the Ukraine on July 23, 1940. She was a vivacious and pretty girl who remained that way throughout her life, despite having lived through the ordeal of the Second World War. She lived in a refugee camp in Germany for two years prior to having the opportunity to come to Canada in 1957, for which she was forever grateful. Here she met the love of her life, Theodor (Ted) who had also emigrated to Canada from Germany with his parents and their family in 1955.
Clara started her work career as a seamstress, later becoming a commercial cleaner and then started her own cleaning company which she proudly operated for over 30 years. Many of her clients became close friends, due to her genuine concern for her clients and their families.
According to her wishes, Clara has been cremated and a Celebration of Life will be held at a later date.
We gratefully acknowledge the warm care and attention that was given to mom and the family during her journey by the Palliative Care doctors, nurses, aides and all support staff.
In lieu of flowers, please consider a donation to Ukrainian Refugees or CancerCare Manitoba Foundation.
Clara's family requests that friends and family visit Clara's tribute wall at www.bardal.ca where condolences, photos, videos, and stories may be placed for all to see.