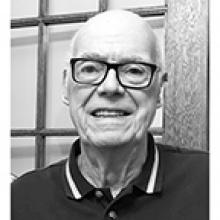 With family by his side, our beloved dad and grandfather passed away peacefully at the age of 91, bringing to a close a life fully and well-lived.
Left to hold his memory dear are daughters, Lisa Deitz, Pamela Sullivan (Tom), and Andrea Philp (Paul Downie); grandsons Christopher and Andrew Sullivan, and Johnathon and Alan Jeffrey Deitz; nieces and nephews; and friends, new and old.
Alan was a life-long Winnipegger, raised in River Heights. He attended the University of Manitoba, where he was only partly distracted from his studies by the discovery of the love of his life and wife-to-be, Maureen. They were married in 1953, embarking on a rich life together that lasted 64 cherished years until Maureen's passing in 2018.
Alan received his B.A. (1951, elected Senior Stick, Faculty of Arts in graduating year) and LL.B. (1955), and was awarded both the University and the Law Society of Manitoba Gold Medals in his final year. He began his law career in the practice of the late Hon. John M. Hunt, before joining the firm of Filmore Riley in 1973, where he was partner. His career continued with his appointment in 1973 as Chief Judge of the County Courts of Manitoba, and then as a judge of the Manitoba Court of Appeal in 1983, where he served until his retirement in 2005 at the age of 75. He was always fascinated by the law and his work was rewarding and satisfying.
Before it was "a thing", Alan demonstrated a talent for work-life balance. In the early days, he was active as a volunteer, board member, community organizer and School Trustee. He was an avid golfer and member of the St. Charles Country Club for decades. Alan and Maureen loved to travel, and made many trips abroad together, everywhere from Europe to Asia to Australia and New Zealand, in addition to regular visits to London, where they were drawn by the theatre and their favourite restaurants. But family and home were always the anchor for Alan. The house on D'Arcy Drive was the spot for summer pool parties and winter snowmobile outings, not to mention the many family dinners and gatherings. More recently, the apartment at The Wellington was the site for classic movie afternoons, dim sum and cribbage Saturdays, and football nights greatly enjoyed in the company of three generations.
With a height of six-foot-six, Alan was a man of impressive physical stature, but it was his honesty and integrity, his gentle heart, and his vast capacity for kindness and fairness that were his most notable characteristics. We learned many important lessons from him - to work hard at things that matter, to treat people with respect, and to try to find the good in all situations, even the most challenging ones. He was the best father and grandfather, and while we suffer the pain of losing him, we still also feel the strength of his love.
Alan and his family are sincerely grateful to the compassionate caregivers from Home Instead, whose support and care helped Alan stay in his own home until the end.
In accordance with Alan's wishes a private interment will be held.