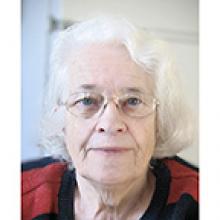 
On February 18, 2022, after a brief illness, Slawka Bejzyk passed away peacefully at Betel Home in Selkirk at the age of 93.
Slawka came to Canada from Ukraine with her parents and three brothers before the start of the Second World War. They settled on a plot of land near Komarno, MB where they worked hard to make a new home and start a farming operation. Slawka went on to become a teacher and spent most of her life teaching in the Komarno/Teulon area while continuing to live on the farm that her family originally settled. As a teacher, Slawka had a long career and taught many hundreds of children. Teaching young children especially suited Slawka, as she had a gentle and caring way about her. Following the war, she spent time in Europe teaching the children of Canadian service members and came back with many stories of her European adventures. She always felt it was her duty to help people. Whether it was through teaching, sending care packages to relatives in Ukraine, or helping her family, she was always giving of herself. As members of her family aged and developed illnesses, she always did everything she could to assist them and make their lives easier. She never complained, instead showing appreciation for what she had and for those around her. Even towards the end, as her life became increasingly difficult, she would always be quick with a smile and a kind comment, appreciative of the care she received at Betel Home and those who visited her. She never lost the ability to smile and say silly things that would, in turn, make you smile.
Slawka will be greatly missed by her nephew David Bejzyk (Alyssa Lindsay); niece Melanie Bejzyk and brother Ole (Sonja) Bejzyk.
She will be buried at St. George's Cemetery just down the road from the family farm, once again close to the beloved family members who preceded her; brothers, Taras and Steve and mother and father Maria and Nykola.