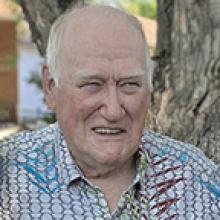 
It is with heavy hearts that we announce the passing of Harold Edward Cook on April 14, 2022 at the age of 81 years old. He passed away peacefully, at home, surrounded by his loving children.
Harold is survived by his children, Shawn (Debbie), Tami Bain (D'Arcy), Joe (Carmelle) and Tara Cruickshank (Geordie); grandchildren, Ryan (Meaghan), Jade (Louis), Alyssa (Carson), Jazmin (Jesse), Shelby (Derrick), Jordyn, Jonah, Derik, Avery, Maggy, Sally, and Marcus; great-grandchildren, Olivia, Cohen, Scotti-Dawn, Andersyn, and Dawson; sister Audrey; special friend Faye; and many nieces and nephews. Harold was predeceased by his parents, John and Millicent, infant brother Daniel, and sisters, Trudy and Lynn Anne.
Harold was born in Palmer, Saskatchewan. He always reminisced about his early years in Palmer where he spent his time helping on the family farm as well as at the Cook's general store. At the age of 17, Harold moved to Regina to pursue a career in the flooring industry. His first 28 years in the flooring industry began with Western Dry Goods, which became Kennedy Flooring. During this time Harold met Beverley Anderson whom he married in 1961. Over the course of their marriage, Harold and Bev moved to Winnipeg, raised their four children, dedicating much of their time to sporting events, camping, and being a big part of the community. Harold particularly enjoyed playing fastball with his beloved Voyageur Hawks in the St. James Men's Fastball league. He played 14 years as a 1st baseman. Harold was a true leader on and off the diamond during those years. His love of baseball brought him to attend a Toronto Blue Jays "fantasy camp" in 1994; an experience Harold always spoke of with great fondness. Among many things, Harold also had a passion for horses. He spent much time training, riding, and rescuing horses. He built and maintained "Cookies Corral" in Petersfield where he developed a labour of love for country living. He was a real cowboy at heart. He worked tirelessly on his acreage in Petersfield grooming and maintaining a beautiful property, which many people came to enjoy frequently. Harold's door was always open to family, friends, neighbours and visitors.
Harold was also an active member in the Petersfield community and church, and had a strong devotion to his Catholic faith. Harold made an early decision in his life to spoil his grandchildren with his time. Harold's time was the best gift ever! To say that Harold's grandchildren were the apple of his eye is an understatement. He travelled from Petersfield to every grandchild's sporting events, dances, school events, etc..., no matter the time, distance, road conditions, and other commitments. His grandchildren appreciated and loved their grandfather immensely for his constant support. They all knew who their #1 fan was. Harold became an expert in almost every sport and activity. Not far behind Harold's love of family, was his passion for his work. After spending 28 years in the flooring industry with Kennedy Flooring, Harold came to a crossroads in his career. In 1985 he took a chance on himself and started FISC ( Flooring Installation Supply Center). From humble beginnings, with his infectious personality and an unparalleled work ethic, Harold managed to build FISC over the last 37 years, into a formidable company in the flooring industry. He was very proud of FISC, and more importantly the lifelong valued relationships it gave him with his many customers, whom he considered friends. Harold was very proud of his staff, who loved him immensely in return. Harold took on the role as the president of Stick Curling Manitoba and the Canadian Stick Curling Association. His passion for stick curling helped him to win a Gold medal at a weekend bonspiel merely two weeks before his passing.
The family would like to give a special Thank you to Dr. Brett Houston and the staff at CancerCare. Harold lovingly referred to them as "his angels". Thank you to Donna, the palliative care nurse who helped guide the family through the end of his journey. We would also like to thank Father Gerald of the Notre Dame Parish in Selkirk for all his support, comfort and blessings.
Prayers will be held at the Gilbart Funeral Chapel, 309 Eveline St., Selkirk, MB on Wednesday, April 20 at 7:00 p.m. The Funeral Mass will be celebrated at St. Paul the Apostle Roman Catholic Church, 2400 Portage Ave., Winnipeg, MB on Thursday, April 21 at 10:30 a.m. with reception to follow.
In lieu of flowers, donations in Harold's memory may be made to CancerCare Manitoba.


Condolences can be left on his tribute wall at www.gilbartfuneralhome.com
Gilbart Funeral Home, Selkirk in care of arrangements.


Peacefully, on Thursday, April 14, 2022 at his residence with family by his side, Harold Cook, aged 81 years passed away.
Full obituary to follow in Tuesday's edition.


Condolences can be left on his tribute wall at www.gilbartfuneralhome.com