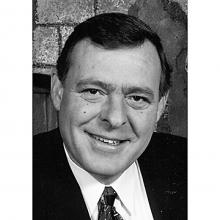 
Bill passed away at home after a courageous battle with cancer.
He is survived by his wife Sharon; daughter Devon; brother Jim Riches; sister Patti Simmons; brother-in-law John Motyer (Anita) and many nieces and nephews. He was predeceased by his parents, Bob and Elaine Riches and his in-laws, Jack and Aline Motyer.
Bill met the love of his life at Nelson McIntyre as high school sweethearts. They married in 1972 and would have celebrated their 50th Wedding Anniversary May 20th. They attended the University of Manitoba together where Bill's love of education took root. Together they had many adventures - travelling east and west to visit family, building a cabin by hand and creating their home on Kara Cove. After a year at Sansom Junior High, he spent several years at Spring Valley Junior High teaching almost every subject. Both staff and students were sorry to see him leave.
After some time in business, Bill became President of Herzing College in 1987 and returned to education. He could be best described as a man of integrity, generosity and caring. Not satisfied behind a desk, Bill spent much of his time in the halls and classrooms often preceded by his whistle. Bill showed an honest interest in the lives of both staff and students. Bill was presented with many awards at company meetings for his successful operations of the Winnipeg Campus. One of his highest honours was the surprise awarding of Queen Elizabeth's Diamond Jubilee Medal for his dedicated service to his peers, community and Canada. Bill held several board positions both provincially and nationally. In October 2021 Hank Herzing and Canadian staff awarded Bill a Lifetime Achievement Award.
Bill's greatest love was family. Bill could not wait to show off his beautiful new daughter Devon Alayne. At three weeks old, they set off in a van loaned by Dave and Corrine to visit family and friends in Saskatchewan, Calgary, the Okanagan, Vancouver and Victoria. No flying for Bill. He adored his daughter Devon and spent many wonderful times "making memories" during yearly trips to Florida and later in B.O.B. (Bill's Old Bus) a 35 foot diesel pusher motorhome, which we bought from dear friends Wes and Joy Henry. Bill loved to drive, whether it was weekends to horse shows or road trips to Victoria, to Texas for dinner and wherever the road took them. He always said it was "The Journey not the Destination". B.O.B. also hosted golf outings with the eightsome of friends.
Bill was an extremely positive man. He appreciated the many dedicated staff at CancerCare Buhler Centre for five years of treatments and compassion. His last few months were not easy, but the excellent Palliative Care team (Dayna and Johannis) and the aides from Home Care Assistance (Tigest, Ligaya, Nancy) helped make his final days filled with gentle kindness.
Cremation has taken place and a Celebration of Bill's life will be held Saturday, May 7, 2022 at 1:00 p.m. at Niakwa Country Club, 620 Niakwa Road.
In lieu of flowers, if friends so desire, donations in memory of Bill may be made to CancerCare Manitoba.