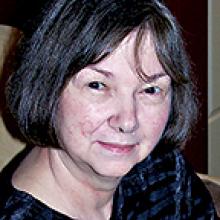 
With heartfelt regret, we announce the passing of Nancy Jean (Waite) Bogaski, age 74, on April 19, 2022, at Selkirk Regional Health Centre with her husband Jack and daughter Jackie by her side.
The family would like to thank the hospital staff for the excellent care they provided in her final weeks.
Nancy was predeceased by her father Tom Waite, mother Sylvia Hall, stepmother Mable Orchard, her grandparents, her Tante Gert, and Oncle Jean-Paul Marchand (godparents to daughter Jackie) as well as other aunts and uncles. She was also predeceased by her father-in-law and mother-in-law, Gus and Olga Bogaski, and brother-in-law Douglas Bogaski. She is survived by her husband Jack, daughter Jackie Palmer (Sean), grandchildren, Gavin and Mia Palmer, brother Don Waite (Anne) of Regina, sister Jean Zariski (Tom) of Drumheller, sister-in-law Sandy Smith, sister-in-law Donna Panasis (Doug) of Markham, sister-in-law Lynn Bogaski of Steinbach, and former sister-in-law Elaine Grymonpre. She is also survived by many cousins, nieces, and nephews.
Nancy was born in Montréal, Québec on January 31, 1948. She lost her mother at an early age and spent two years being cared for by her paternal grandparents. Shortly after her father married Mable, he accepted a transfer to Winnipeg when she was a teenager and she attended River Heights School and then Grant Park High School. After graduating, she enrolled at the St. Boniface Hospital School of Nursing. She graduated as a Registered Nurse in 1969 and worked at the hospital the following year.
She met her husband Jack in 1968 while he was attending university and helped him get through his final year. After he received his certificate in education, they were married August 22, 1970, and enjoyed what was approaching fifty-two years of marriage. After a short honeymoon in Detroit Lakes, Minnesota, they moved to Powerview, Manitoba where Jack taught and Nancy worked as a nurse at the Pine Falls Hospital for the next four years. With Nancy's encouragement and support, they moved back to Winnipeg so Jack could continue his education while Nancy worked for two years at Victoria Hospital in Intensive then Critical Care. They then moved to Selkirk, Manitoba where Jack taught, and Nancy worked at the old Selkirk Hospital on Eveline Street, which in later years became apartments. In 1979, her daughter Jackie was born at this hospital. Due to Jackie's health concerns, Nancy and Jack decided that she would stop working and devote herself to their daughter's care. Here she did an astonishing job lovingly taking care of Jackie and ensuring that she would receive an excellent education. She volunteered at Jackie's elementary school, Centennial School, for a number of years and served on the parent council. When Jackie went on to the junior high, she served on the executive of the school's Band Parent Association.
Unfortunately, it was at this time that she began to experience health problems and was diagnosed with Fibromyalgia and Chronic Fatigue Syndrome. After facing numerous tests and seeing many doctors, it was determined that she would have to try and live with these conditions to the best of her ability. For over twenty years, she developed coping strategies, and, with the support of her family, this allowed her to live her life as well as she could.
Even though she faced many health challenges, she found ways to enjoy life. She was supportive, thoughtful, encouraging, considerate and was everyone's cheerleader. She was very personable, made friends easily, and had the ability to talk and connect with anyone. She was kind and loving and had a special relationship with her grandchildren, Gavin and Mia. She was their Nana, and she took an interest in all aspects of their lives. She loved to spoil them with after school snacks and enjoyed hearing about their days.
She will be missed and remembered by all who knew her.
A Celebration of Life will be held at Gilbart Funeral Home, 309 Eveline Street, in Selkirk, at 1:00 p.m. on Friday, April 29, 2022. It will also be live streamed and a link will be provided on her obituary at www.gilbartfuneralhome.com
In lieu of flowers, donations will be gratefully accepted in memory of Nancy at the Selkirk & District Community Foundation (200 Eaton Ave., Selkirk, MB R1A 0W6 or online at DONATE (sdcf.ca). These thoughtful donations will support creating the Nancy Bogaski Memorial Bursary for a student pursuing a career in nursing.